Gov’t must stop being a gambling lord 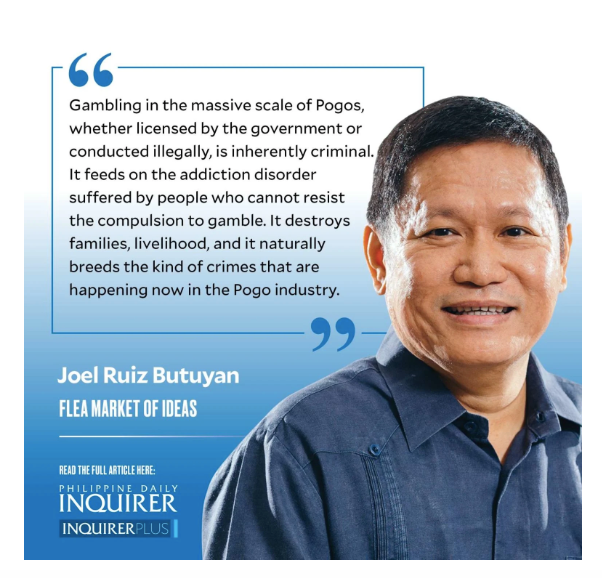 What’s the difference between our government and underworld gangsters when it comes to their involvement in gambling? None. Both are immoral opportunists who take advantage of people’s addiction to gambling in order to reap tons of money.

Gambling is in the limelight again because our government is considering prohibiting Philippine offshore gaming operators (Pogos) from operating. These are the companies that have set up shop in our country, offering online gambling services to customers abroad. Pogos cater entirely to mainland Chinese gamblers, from all indications. The growth of Pogos created a boom in our economy because of the entry of as many as 500,000 Chinese workers before the pandemic, per estimates. This drove up a huge demand for commercial and residential rental spaces, the sprouting of so many restaurants, and a huge jump in the businesses of ancillary industries.

The pandemic affected the operations of Pogos, and many closed shop, but apparently many still remain because they’re giving resurgence to a different kind of “industry”—crime. In particular, a rise in kidnapping, human trafficking, drug smuggling, prostitution, money laundering, and other illicit operations is being associated with Pogo operations. Chinese criminal gangs have reportedly entered the country, and they’re responsible for rampant kidnappings, victimizing Pogo workers.

The spate of these crimes is causing the government to consider closing Pogo operations. But what does the government expect? Gambling in the massive scale of Pogos, whether licensed by the government or conducted illegally, is inherently criminal. It feeds on the addiction disorder suffered by people who cannot resist the compulsion to gamble. It destroys families, livelihood, and it naturally breeds the kind of crimes that are happening now in the Pogo industry.

It was bad enough that the government has completely opened all the floodgates to allow the uncontrolled growth of huge casinos in our country, the open access to any Juan, Pedro, and Maria in these casinos, the legalization of jueteng into the small town lottery, and the massive operations of online sabong, until they were closed only recently. It’s equally worse and even shameful that the government is exporting gambling—through Pogos—and destroying lives of people abroad.

By our laws, any form of gambling is illegal unless they’re licensed by the government. A penalty of up to 20 years of imprisonment is even imposed for illegal gambling. But why does a government license make gambling legal and morally acceptable?

Gambling should be considered legal and deemed to conform to community standards when they are operated purely for entertainment purposes. The old-style sweepstakes, weekly lotto, small town cockfighting events, and bingo games are examples of gambling as forms of entertainment. Games of chance have become deeply ingrained forms of human entertainment, so government-issued gambling licenses should be meant merely to satiate people’s predilection for recreation and fun.

However, gambling should be deemed illegal and morally unacceptable when it becomes a means of generating windfall income. And on this score, there should be no difference on whether the huge revenues go to the government or benefit criminal gangs.

The issuance of gambling licenses, in order to generate huge government revenues, can never be justified by the fact that said revenues are used to fund public services like health and poverty assistance. It’s no different from allowing the government to issue licenses for the commercial operation of shabu dens in order to raise humongous tax revenues to be utilized for public services. Why not altogether issue licenses to kidnap gangs, and out of the government’s share of ransoms paid by wealthy families, distribute them to poor families? A sanctified purpose can never justify a despicable means.

A government policy of encouraging addicts (gambling, drugs, or other forms) to grow and multiply out of its people, as a revenue-generation scheme, guarantees the destruction of every crucial fabric that holds society together.

Our government must stop thinking, acting, and behaving like a gigantic gambling lord.