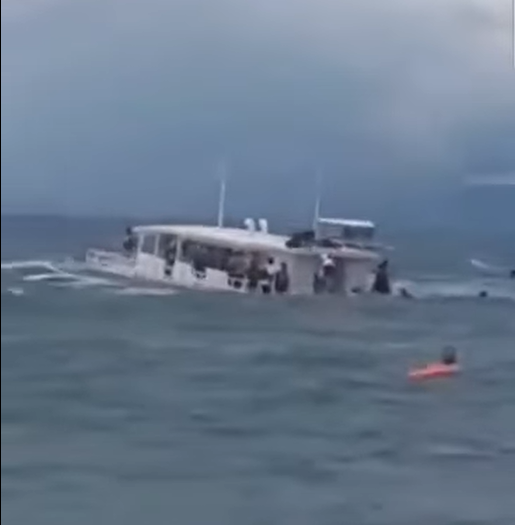 The Coast Guard and the Local Disaster Risk Reduction and Management Office personnel of Cordova town rescue 35 person from an island hopping pump boat which sank off the coast of Cordova town in Mactan Island on Sept. 25. | Contributed photo

LAPU-LAPU CITY, Philippines — Fisherfolks in Mactan Island especially in Olango Island are reminded not to go out to sea due to the inclement weather brought about by Typhoon Karding, which is affecting the Luzon area on Sunday, Sept. 25, and Monday, Sept. 26.

Fred Anlocotan, head of the Local Disaster Risk Reduction and Management Office in Cordova, gave this reminder after they helped rescue 32 passengers and  3 crewmembers of a pump boat, an island hopping boat, which sank near the coastal waters of Barangay Gilutungan, Cordova town on Sunday, Sept. 25.

Anlocotan said that the pump boat was on an island hopping trip and departed from Barangay Marigondon, Lapu-Lapu City early that day.

Anlocotan said that they are about to travel to Gilutungan Island and Nalusuan Island, however, as they were heading to the island, the engine of the pump boat conked out at past 11 a.m. that day.

(The engine of the pumpboat conked out, then water entered the boat because of waves were really big at that time.)

Due to the big waves and the seawater inside, the pump boat slowly sank.

The passengers were also brought to a restaurant at Gilutungan Island.

(We then coordinated with the Coast Guard so that they could find a boat to ferry the rescued passengers and crew members to the mainland.)