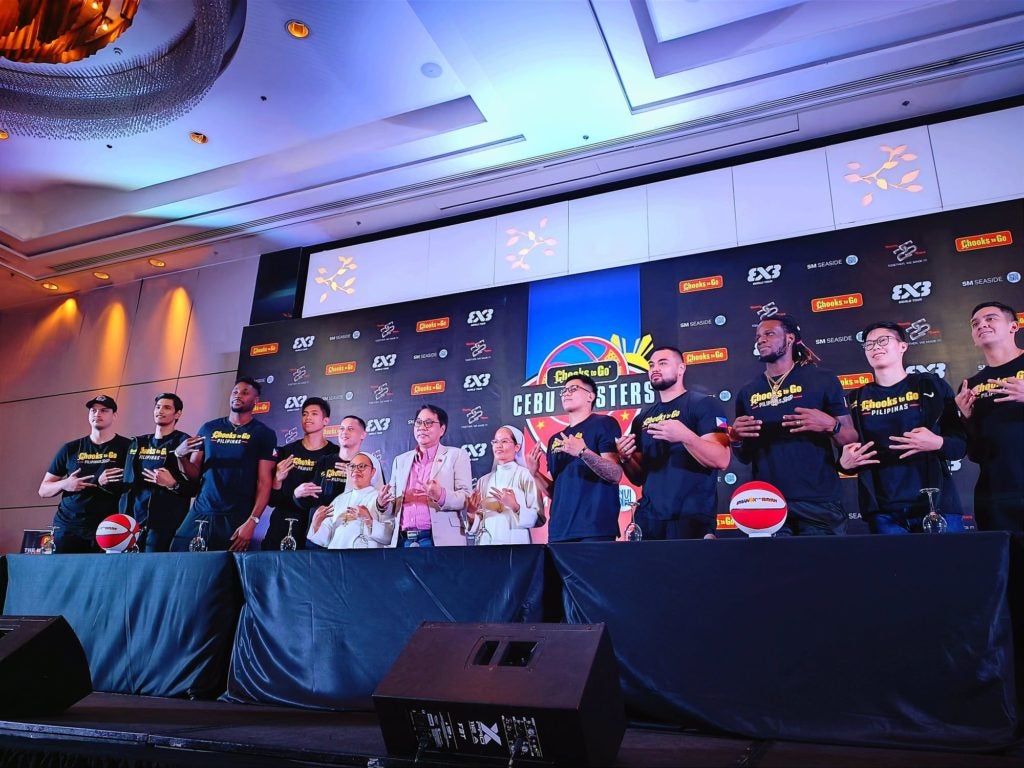 Chooks-to-Go Pilipinas chief and Bounty Agro Ventures president Ronald Mascariñas (in pink shirt) is surrounded by the Cebu Chooks and Manila Chooks players along with the officials of the Sisters of Mary Boystown and Girlstown during the presser of the Chooks-to-Go Pilipinas FIBA 3×3 World Tour Cebu Masters at the Radisson Blu Hotel on September 29, 2022. | Glendale Rosal

CEBU CITY, Philippines — There is more to the Chooks-to-Go Pilipinas FIBA 3×3 World Tour Cebu Masters than being a basketball extravaganza.

This FIBA international 3×3 tournament is set to unfold this weekend, Oct. 1-2, 2022 at the SM Seaside City Cebu.

It features 14 of the world’s best teams including two Filipino squads which plays for the flag and country.

More importantly, their campaign will be crucial for their bid to qualify in the 2024 Paris Olympics.

Ronald Mascariñas, Chooks-to-Go Pilipinas chief and Bounty Agro Ventures president, wants to reach one of his ultimate goals to send his team into the 2024 Paris Olympics by continuing to campaign in international tournaments like this one.

During the press conference on Thursday, Sept. 29, 2022, at the Radisson Blu Hotel, Mascariñas is optimistic seeing the growth of his basketball program that he started in 2019 here in Cebu.

For Mascariñas, the Philippines’ continued ascent in the FIBA 3×3 rankings is a testament of their hard work and commitment to further develop the quality of basketball in the country.

“Hindi namin makakalimutan na in 2019 before the Olympic qualifying tournament, the Philippines was ranked No. 59,” said Mascariñas.

(I cannot forget that in 2019 before the Olympic qualifying tournament, the Philippines was ranked No. 59.)

After initiating his program which recruited players in the likes of Cebuano Mac Tallo and a bunch of talented and committed players, Mascariñas’ basketball program grew more significant in the FIBA 3×3 scene.

From No. 59, the Philippines rose to the No. 18 spot before the Tokyo Olympics 2020 was moved the following year. It was the Philippines’ highest rank achieved in the FIBA 3×3 world rankings.

The Philippines competed in the Olympic qualifying tournament but faltered.

Nonetheless, Mascariñas isn’t giving up on his basketball ambitions.

He said that they had learned their lessons and had played smart ever since.

“We’re not giving up, the next Olympics is 2024 in Paris. We’re trying our best, but this time, we are ranked No. 21 in the world,” Mascariñas said.

“We have a big chance of qualifying to the Olympics and we are very thankful that we have players who committed themselves na bigyan ng karangalan ang ating bayan (to give honor to our country),” he said.

“We all know basketball is the most famous sports dito sa Pilipinas, meron na tayong mga players (her in the country, we now have our players) who devoted their time and commitment for the country,” said Mascariñas.

This weekend, Cebu Chooks and Manila Chooks will go up against the world’s best 3×3 teams. Competing in the tournament and especially winning it would earn them generous points that will further improve the Philippines’ FIBA 3×3 world ranking.

It also means that their chances of qualifying in the Olympics will further improve.

For Tallo, the No. 1 Filipino 3×3 player, he is very excited to showcase his skills in front of fellow Cebuanos this weekend.

(I am grateful to boss Ronald (Mascariñas) because of him I can play for the country, I can return to Cebu. I can play in Cebu. I am so excited because it’s my first time to play as a pro here in Cebu.)

Tallo will team up with fellow Cebuano Zach Huang, along with Brandon Ramirez, and Mike Nzeusseu for Cebu Chooks.

Manila Chooks is comprised of another Cebuano Dave Ando along with playing coach Chico Lanete, Henry Iloka, and Dennis Santos.