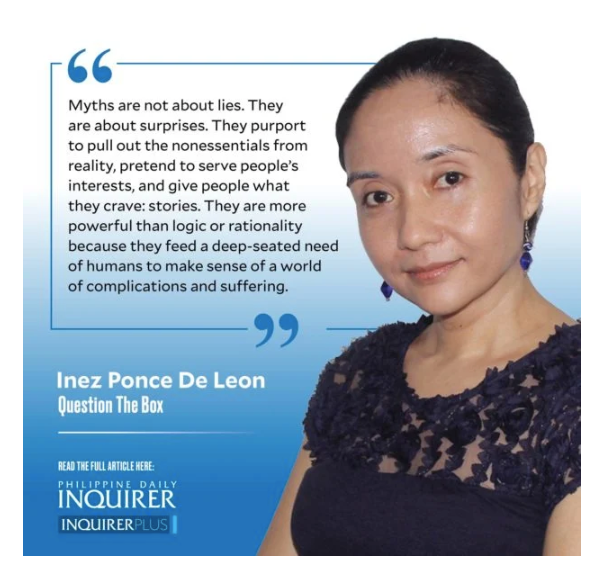 We’ve been subjected to a variety of myths these last few years: a distortion of a dark decade in our country’s history, the spread of falsehoods about a so-called golden age, the rebranding of a politician on his path to the presidency.

A myth, however, is so much more than lies arranged into a story. To critically appraise our modern myths, we turn to Roland A. Barthes, the French philosopher whose “Mythologies” has influenced how we study culture and its preoccupation with meaning.

In Barthes’ philosophy, a myth can take the form of a story, images, a fantasy; whatever its nature, a myth is an oversimplified version of reality. A myth asks to be reveled in rather than questioned; it parades itself as real by appealing to one’s desires to remove the anxiety and uncertainty of the everyday. A myth invites one to disregard further thinking and analysis, making it highly attractive to those who want to see all the “facts” in one go.

Take, for instance, the myth of a government official as a father or mother of their domain. This image renders them immune from critique. In a culture that relies so heavily on authority rather than logic, who would ever condemn their own parents?

The job of a government official, then, appears simple: get voted into office, win on an abstract platform, tell people what to do, demand that you be respected by always being agreed with, fly off to another country to watch racecars while people starve from the onslaught of a recent storm—and never be punished because the myth is so strong, it creates a reality that cannot be questioned.

A myth, Barthes says, removes both history and meaning, emptying reality, and creating a world with no depth. As seen in the example earlier, myths are neither harmless creatures nor mere stories: they are actually weapons.

In Barthes’ time, myths were created around the prestige of wine, sports spectacles, actors and actresses, all as a way to impose the tastes of the elite as a standard against which all other tastes would be judged.

Today, myths are created to distort history, or to distill the complexity of reality—because truly, reality as we know it is complicated. History, language, culture, individual agency—all these aspects of reality create our world, but mythmakers do away with them and promise to boil everything down to a believable essence that will not require people to look for evidence.

The myth, therefore, is a weapon designed to keep people from thinking. It can even make them frown on those who demand accountability and change. Myths are designed to subdue dissent.

A myth does not hide the truth, but deforms it into an image meant to distract people from sordid, painful reality. Long bridges, giant theaters—they should symbolize an obsession with impractical infrastructure as a sign of modernity. Instead, they are redefined as evidence of a golden age. Never mind that many died when these buildings were constructed, or that these so-called modern marvels were paid for with mountains of debt.

Why? Because myths are not about lies. They are about surprises. They purport to pull out the nonessentials from reality, pretend to serve people’s interests, and give people what they crave: stories. They are more powerful than logic or rationality because they feed a deep-seated need of humans to make sense of a world of complications and suffering.

This is why fact-checking often does not work: a myth, in Barthes’ sense, cannot be debunked because it empties a story of facts, and places romance instead.

It is easy to understand, then, why the “unity” platform was so appealing: it disregarded the larger problems of a lack of support systems in society, but it could not be questioned. It created a story that people could tell to comfort themselves when their government officials suddenly demanded confidential funds or disappeared during calamities.

The fast fix to such myths is to weave better myths, but that would be to oppress society under another distraction. The long-term goal is perhaps to make society curious, to plant a desire to dig deeper into myths, until people accept that there are problems that must be solved rather than ignored.