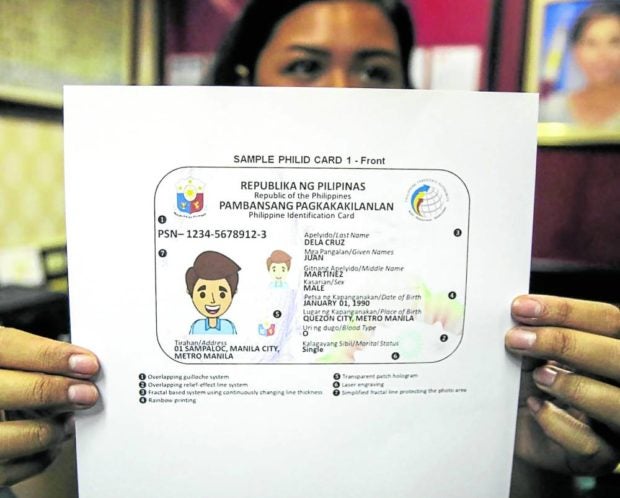 PAPER ID A congressional worker shows a sample of the PhilSys ID presented to the House of Representatives when the Philippine Statistics Authority was seeking funding. —INQUIRER FILE PHOTO

Dennis Mapa, national statistician and civil registrar general, who heads the PSA, said the paper IDs was “the digital version of the PhilSys ID, which is printed on a piece of paper.”

Mapa assured those who registered that everyone who registered in PhilSys will still receive the plastic card version even if they have claimed their paper IDs, which he called “ePhilID.”

“The printed ePhilIDs will be issued in PhilSys registration centers nationwide. We hope to replicate the results as we accelerate the rollout to more locations in the country and ensure a seamless process for every registered person in claiming their printed ePhilD,” Mapa said.

He said that the paper IDs would have the same benefits as the plastic cards, such as faster and seamless transactions in accessing financial and social protection services requiring proof of identity, subject to authentication.

Trust is the only cost

Just like the PhilSys ID card, claiming a printed ePhilID is free of charge.

“We are confident that the public [will] have the same level of enthusiasm as we advance the use of the digital PhilID through the printed ePhilID, especially since PhilSys, at its core, is a digital ID system,” Mapa said.

The implementation of the Philippine Identification System took nearly 20 years before it was enacted into law.

First conceived in the 1990s during the administration of the late former President Fidel Ramos, there was widespread opposition to a national ID system because of public concerns on privacy and how the government would handle the personal data of Filipinos.

There were attempts to enact a national ID law from the 9th Congress up to the 16th Congress, but all efforts failed until the 17th Congress when Republic Act No. 11055, or the Philippine Identification System Act, was enacted into law.

And yet, four years after the enactment of RA 11055 and several scandals on the leakage of personal data, mainly on social media, the government has not completed the issuance of cards, just like driving licenses and car plates, although they already have people’s personal data.

As of Oct. 20, 385,657 paper IDs were already claimed. The PSA has also pregenerated close to 2 million printed IDs in preparation for the expansion rollout.