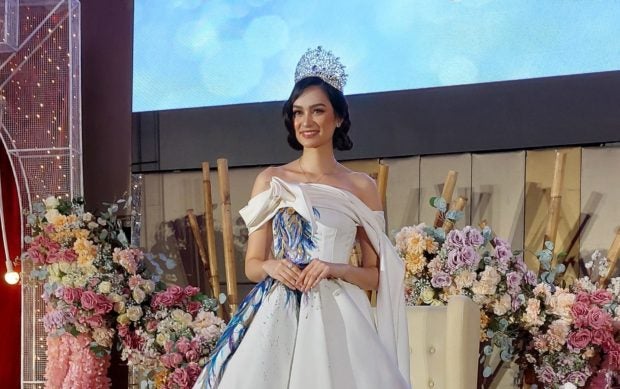 MANILA, Philippines—Binibining Pilipinas International Hannah Arnold is now in Japan to stake her claim to the Miss International crown. But followers from whichever part of the world may help her get closer to her goal.

The Miss International pageant is reintroducing the online-voting component for the contest’s 60th edition this year via its recently launched mobile app. Through the poll, which commenced on Nov. 30, fans from around the world can vote for their preferred delegate.

The top vote-getters from three geographic regions, split according to time zones, will automatically advance to the Top 15. The Philippines is under the “Asia and Oceania” region. Another group lumps countries from “Europe and Africa,” while the other one includes countries from the “Americas.”

Arnold, a forensic scientist and model from Masbate, is among 68 delegates who are participating in the international pageant’s “comeback” staging, after the 2020 and 2021 editions were canceled because of the COVID-19 pandemic.

The previous installment was held back in 2019, where Sireethorn Leearamwat became the first Thai woman to win the crown.

Arnold had been waiting for years to get the chance to represent the Philippines abroad and give the country an international title. She uprooted from Australia where she finished her studies to train for pageantry in 2018. She joined the 2019 Bb. Pilipinas pageant and finished in the semifinals.

She enlisted for the 2020 pageant, but the global health crisis prompted the organizers to postpone the competition. It resumed in 2021 and she captured the Bb. Pilipinas International title.

But organizers of the international pageant again canceled the 2021 contest, so Arnold relinquished her Bb. Pilipinas crown to Nicole Borromeo in 2022 without seeing action abroad. Confused followers wondered whether the predecessor would still be able to compete in Miss International.

The Bb. Pilipinas Charities Inc. (BPCI) cleared the air and said Arnold will still go to the 60th Miss International pageant, while Borromeo is already reserved for the global tilt’s 2023 edition.

It has been a long and arduous journey for Arnold, but she is finding motivation from Bb. Pilipinas queens before her, who also exhibited patience and resolve, particularly 2015 Miss Universe Pia Wurtzbach who many observers say look like her.

“That’s definitely one of the best compliments that I have received. And even when ‘Ate’ Pia said it to me herself, she said it was like looking in the mirror but a younger and taller version, I got so ‘kilig,’” Arnold replied when the Inquirer asked her before she left for Tokyo.

“We all know Ate Pia joined [Bb. Pilipinas] three times. And before she went to Miss Universe, some people were starting to lose faith in her. But she just kept on enjoying the whole process, being herself. And that’s really my motivation. I hope I will have the same story as her. That on the night, all my hard work and fate will match up, and it will be a successful night,” Arnold continued.

The 60th Miss International pageant will stage its coronation program at the Tokyo Dome City Hall in Japan on Dec. 13.

Your subscription could not be saved. Please try again.
Your subscription has been successful.
Read Next
PDEA-7: Former MMA fighter uses packaging of courier service companies to hide shabu during delivery