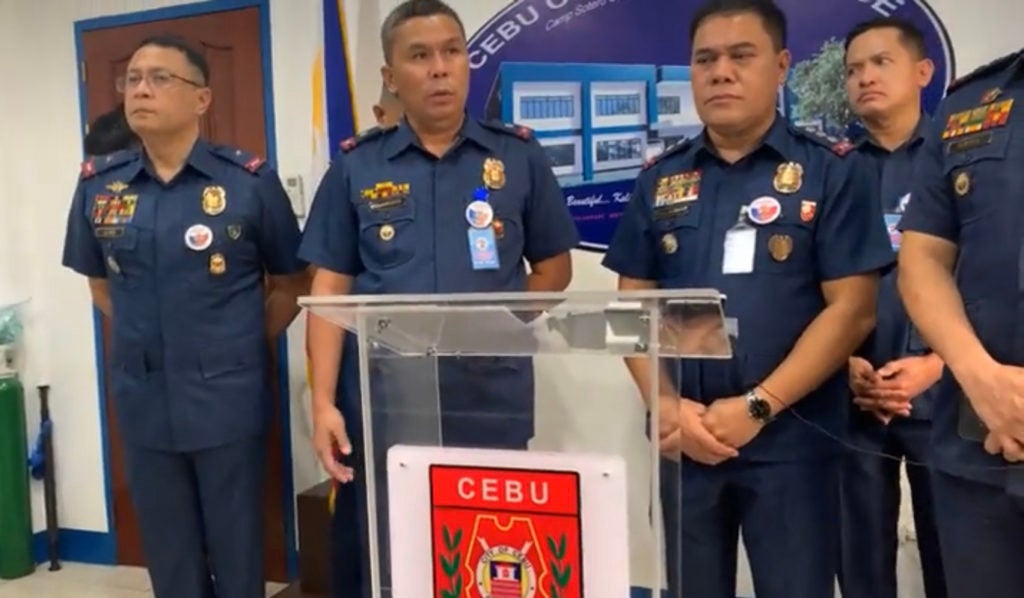 Police Major Alvin Llamedo, chief of Talamban Police Station (center), answers queries from the media during a press conference on Monday, December 5, at the CCPO headquarters.

CEBU CITY, Philippines — Cebu City policemen continue to investigate the circumstances and to find out the whereabouts of six missing persons, who were allegedly taken more than two months ago in an inn in Barangay Talamban by individuals who claimed that they were conducting a police operation.

Police Major Alvin Llamedo, chief of Talamban Police Station, said they only resumed or continued their investigation on Nov. 29 when a complaint from relatives of two of the six missing persons, through members of the staff of the TV program of Senator Raffy Tulfo, coordinated with them.

Llamedo said that the relatives of two of the six missing persons sought the help of Senator Tulfo in his TV program at the end of November or more than two months after their relatives went missing.

Llamedo said that they were still appealing to the relatives of the missing persons to visit the police station personally and file a formal complaint so that they could start a full-blown investigation on the alleged abduction of the six persons last Sept. 26.

He said all they could conduct then was an initial investigation because they were waiting for a formal complaint to be filed before they could have a full-blown investigation.

Initial investigation showed that three of those missing were women from Ozamis City.

Llamedo said that they only received a report of missing persons from the staff of the inn three days after these individuals were allegedly taken last Sept. 26.

He said that they advised the manager to come back after 24 hours for a followup, but then the manager did not return to the police station.

Llamedo said so the investigator assumed that the missing persons had been located then because the inn manager did not return for a followup of the case the following day.

He said they only knew that the persons reported on September were still missing when the members of the staff of Senator Raffy Tulfo coordinated with them because relatives of two of the six missing persons sought the senator’s help in his TV program.

During the initial investigation in September, Llamedo said that they found out that eight persons checked into the inn last Sept. 10, but a day later, two of them left.

(The one who gave the report about the missing person was the manager of the inn after the incident on Sept. 26. It was just a missing person because, according to him, it was just allegedly a police operation.)

(During the incident, the persons who allegedly abducted (the six persons) identified themselves as policemen.)

Llamedo said that they did not conduct any operation at that time when the six persons were reported to be taken.

He also said that he had checked with other police units about any police operation in their area at that time but they had no operations conducted then when the six persons were taken.

Again, Llamedo said that they also assumed that the missing persons were found because the inn manager did not return for a followup of the case.

But last Nov. 29, relatives of two of these six missing individuals sought the assistance of Senator Raffy Tulfo in his TV program, where the latter’s staff coordinated with the local police.

Dalogdog further directed Llamedo to conduct an ocular inspection at the inn and gather pieces of evidence that would shed light into the incident.

Llamedo said that they checked and found out that the security cameras in the inn were not functioning.

Despite this, he said they continued to gather more evidence about the six missing persons taken by alleged policemen at the inn in Barangay Talamban.