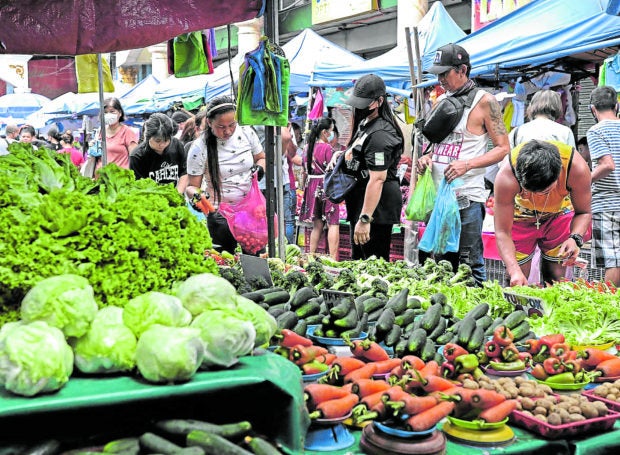 CHRISTMAS AND HIGH PRICES Consumers buy fruits and vegetables at a market in Quiapo, Manila, on Tuesday. These food staples have become more expensive, driving up the country’s inflation. —RICHARD A. REYES

MANILA, Philippines — While he admitted that inflation is “running rampant and out of control,” President Ferdinand Marcos Jr. on Tuesday said the Philippines is still on track “to maintain a strong economic performance” and achieve the government’s growth target of 6.5 to 7.5 percent for this year.

The rate of increase in prices of goods and services in the country accelerated to 8 percent in November, exceeding the 7.7 percent figure back in October, which was already the highest in 14 years.

Data from the Philippine Statistics Authority (PSA) released on Tuesday showed that the core consumer price index reached that level, driven by price gains in food and non-alcoholic beverages.

The commodity group had an inflation rate of 10 percent, accounting for the biggest weight in the inflation basket at 58.4 percent.

Vegetables, rice, and sugar were the top three goods that saw an increase in their prices.

Restaurant and accommodation services were the second biggest commodity group that was the source of inflation, with a rate of 6.5 percent and a share of 19.8 percent.

The November figure brings the year-to-date inflation to 5.6 percent, in close proximity to the government’s target of 5.8 percent.

Following the release of inflation data, Marcos, addressing an economic forum by the Joint Foreign Chambers (JFC) of the Philippines, said of that “poor news” that “we are now trying to identify the areas of the economy that are the main drivers of that inflation.”

“The main drivers, unfortunately, are still imported inflation. So again import substitution is still a good idea not only for foreign exchange reserves but also so that we can keep our inflation rate down,” he added.

The president also noted that the country continues to recover from the pandemic.

But he also pointed out that “our growth rate looks healthy, our peso has become a little stronger, [and] our unemployment rate is quite reasonable, considering the situation.”

“[H]owever, on the other side of that coin, there is still inflation that is rampant and out of control,” Marcos said.

Rizal Commercial Banking Corporation chief economist Michael Ricafort said when asked to comment: “There is a chance that year-on-year inflation could have already reached the peak in the fourth quarter of 2022, and could start to ease gradually thereafter and could even ease year-on-year significantly, especially starting in the first quarter of 2023.”

Ricafort noted this since crude oil prices have already gone down from a high of $130.50 per barrel in March to $77 per barrel today.

“However, this could be offset by any additional storm damage toward the end of 2022, in case there is any, as well as some seasonal increase in demand and prices of Christmas holiday-related products toward December,” he said further.

But PSA Deputy National Statistician Divina Gracia del Prado said her agency was unsure if December inflation could be higher, citing historical data trends which show that inflation in the last month of a given year could go both ways.

But more hikes are seen on the horizon until around mid-2023.

The Monetary Board (MB), the central bank’s seven-person policy-making body, decided to raise the interest rate on the central bank’s overnight reverse repurchase facility by 75 basis points (bps) to 5 percent, effective on Nov. 18.

Almost a week ago, the International Monetary Fund (IMF) nudged the Philippines to further tighten its monetary policy amid persistent inflationary pressures, making the recommendation after its periodic consultations with key officials.

BSP Governor Felipe Medalla said in an interview with Bloomberg TV last week that he is personally looking at several more increases of 0.25 ppts in the succeeding meetings of the MB, which is set to meet one more time this month before the year ends.

The MB holds a policy meeting twice in every quarter, once a month except for the first month of each quarter.

In a statement, Albay Rep. Joey Salceda recommended that the President issue an executive order that would ensure all supply bottlenecks for food and other farm produce are eased to address logistics and transport costs in food prices.

“Local government units may be directed to lift all hindrances and blockages across farm-to-market routes. The Department of Transportation may be directed to ensure the proper flow of traffic feeding into inter-island nautical routes,” he suggested further.

“As much as 48 percent of prices of certain food staples are logistics costs,” Salceda pointed out. “We can make an impact on food prices by reducing transport bottlenecks.”

The Albay lawmaker also cited his measure seeking to classify large-scale food price manipulation as economic sabotage—which he said has the support of the House leadership and the committee on agriculture and food.

“There is an abundance of tools available to the President and his economic team to combat inflation. Immediate executive action may still take time to actually address fundamental drivers of inflation, but would be proper signaling for the public and private sectors,” Salceda said.

“Inflation remains the toughest economic storm we must weather, and our ships must sail in the same direction,” he said further.

“The administration should prioritize steps to reduce the prices [of basic commodities] and raise the salaries of Filipinos. This is not the time for a Maharlika Investment Fund, the government should not have budgets for oppressive policies like the NTF-Elcac and confidential funds. What should be prioritized are funds for aid, increase in salaries and wages and benefits for the people,” the House deputy minority leader said in a statement.

She added: “It was easy to bring back the P10 billion to the NTF-Elcac and the P150 million in confidential funds of the Department of Education but when it comes to salaries, benefits and primary requirements for safe and quality education, the government has no budget?”

“Prices of ingredients for sauteing are now like gold. This must be the ‘golden era’ mentioned during the campaign period,” the lawmaker lamented in Filipino.

“The Marcos administration must do something to ease the rising prices of basic goods. Increase salaries and wages to give the people more purchasing power and remove [the value-added tax] and other taxes on essential goods, especially oil products,” she said. —WITH REPORTS FROM JEANNETTE I. ANDRADE AND NESTOR A. CORRALES

Inflation in Central Visayas accelerates to 8.1% in Sept.