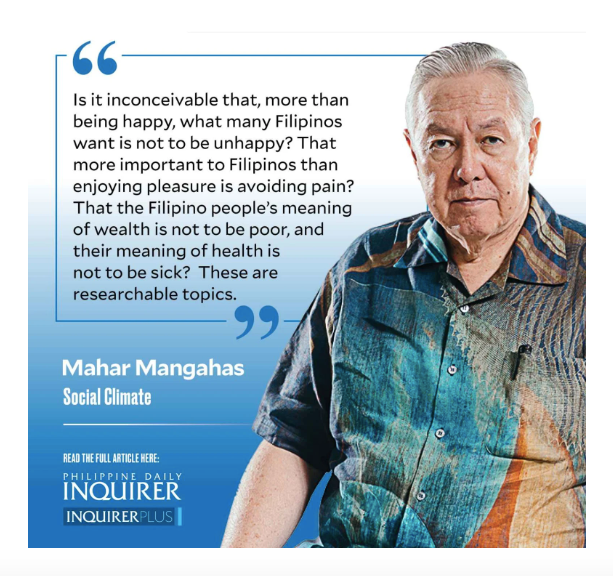 Those implications are moral ones. All the countries—and the Philippines is one of them—that accept the UN’s SDG1 and SDG2 as indicative of development are necessarily accepting such moral implications as well. It is saying, in effect, that everyone’s having enough, to consume in general and to eat in particular, is preferable to some people having more than enough while other people do not.

Or consider SDG3, namely Good Health, for which the best-known indicators are the rates of infant mortality and child mortality. Those are expressions of life’s being short, rather than long. They say in effect that an extra year of life is more valuable for a child than for a senior citizen.

The assessment of progress cannot escape moral valuation. But there’s no need to escape it anyway if the valuation is acceptable by consensus.

Imagine a consensus created by ignorance, rather than illumination. What makes a consensus difficult to attain is the immense differentiation of individuals in a society. But suppose the individuals are totally unaware of their differences, particularly their own social advantages and disadvantages?

In his great book, “A Theory of Justice” (1971), the American philosopher John Rawls (1921-2002) imagines a group of unborn “souls” with no distinctive individual attributes as yet, but who are conscious of the relevance of such attributes in the world.

Suppose these souls are prevented by a “veil of ignorance” from knowing what will be their own personal circumstances upon birth. They do not know what will be: their place of birth; the identity of their parents; the ethnicity, race, geographical background, religion, spirituality, language, upbringing, occupation, caste and social, political, and economic status of their parents, relatives, friends, and associates; their sex upon birth, gender-preference while growing up, and partner-preference upon maturity; their personal physical, mental, social, or cultural talents, and handicaps; their likes and dislikes; and all other moral baggage.

Then suppose these souls are tasked to design for themselves, out of self-interest, a contract of rules about justice as fairness in the world into which they will be born, to which they must unanimously agree before being born when they would acquire their individual distinctions at random.

What would be the terms of such a social contract? Rawls argues that the contract, in order to elicit unanimity, will stipulate the minimum basic rights of every individual. These stipulations are bound to be cast in terms of negatives.

No slavery, lest one be made a slave. No threat to life or liberty; no death penalty. No bullying. No discrimination, meaning no differentiation unless for personal merit. No unlimited monopolies of natural resources or of technology.

The Rawlsian concept of justice is not alien to the Philippine setting. I know a number of academics who teach it to their students. It is clear from his writings that the late Jose W. Diokno was a Rawlsian (see his “A Filipino concept of justice,” Solidarity magazine, 1983).