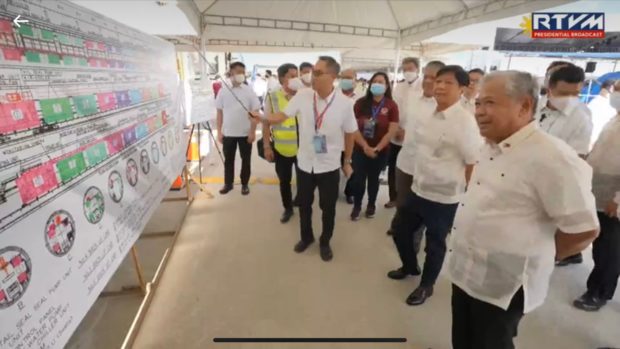 MANILA, Philippines — President Ferdinand “Bongbong” Marcos Jr. on Monday vowed that his administration would continue to invest and improve the country’s transportation system to ultimately benefit the nation.

He made the remark during the launching of the Metro Manila Subway project’s tunnel boring machine in Valenzuela City, describing the event as a “very apt beginning” for the new year.

The President said the launching is a testament to his administration’s commitment to continue the projects of previous administrations and spearhead more.

“We will continue to invest and improve on our transportation systems as well as pursue more projects in the years to come so that Filipinos can gain greater access to places of work, commerce, recreation, and other vital areas,” Marcos Jr. said in his speech.

“Having an effective and efficient transportation system will have multiplier effects on employment, the economy, our society. It will bring comfort, convenience, an easier life for all,” he added.

He, however, appealed to Filipinos’ patience since big-ticket infrastructure projects will take years to complete.

“I’d like to emphasize to our countrymen that big-ticket projects such as this take years to be completed. So I ask not only for your continued patience but also for your continued trust and support for the government,” the President said.

The country’s first subway system project is in partnership with the Japanese government and Japan International Cooperation Agency (JICA).

The President thanked the Japanese government and JICA for their assistance on the project and other infrastructure programs.

“I am confident they will help us shape our railway infrastructure and keep them at par with the highest international standards,” Marcos said.

The Metro Manila Subway Project spans 33.1 kilometers, from Valenzuela City to Parañaque City, with a connection to NAIA Terminal 3.

The JICA is funding the project through a loan agreement.

Following NEDA Board approval on September 23, 2021, the total project cost is over P488 billion.