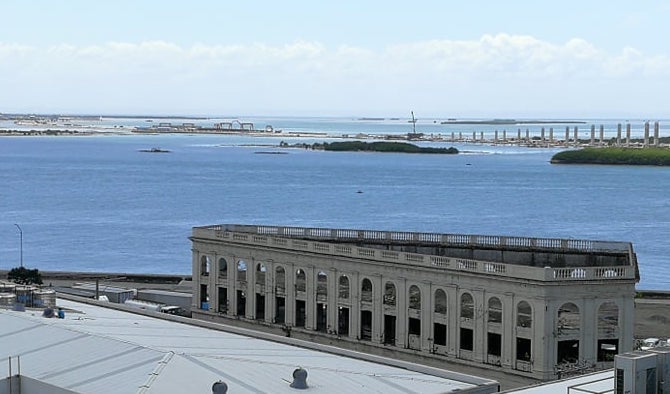 CEBU CITY, Philippines—Cebu City Vice Mayor Raymond Alvin Garcia expressed frustration after he said that the Compañia Maritima is gradually returning to its ugly condition after the city government-initiated development was temporarily stopped.

As a lawyer and fully aware of the sub judice rule, Garcia was careful not to discuss the merits of the ongoing legal dispute over Compañia Maritima management, when he delivered a privilege speech before the city council on Wednesday, January 18, 2023.

Garcia clarified that he is only sharing what he “feels and knows” about the issue in his capacity as chairman of both the Cebu City Historical and Cultural Affairs Commission and the Waterfront Development Commission.

Garcia said that he was hopeful that after years of neglect, the Compañia Maritima finally got the treatment it deserved, following the city government’s execution of the redevelopment of the Carbon District.

READ: Compania Maritima building wrapped as a ‘gift to Cebu’ in time for Christmas season

He noted that the Pusó Village would have been a “strategic component of the development in this area and would house Best-of-Cebu products and services.”

“That hope is fading, to be honest, given what I see from our media just weeks after our possession of Compañia Maritima was interrupted. There again is the slow accumulation of litter, the presence of potential settlers, the undeniable markers of urban decay,” he said.

Although the vice mayor did not name the government agency that is a party to the case against the Cebu City government, CDN Digital, earlier, published that a court here in Cebu City granted the Cebu Port Authority’s (CPA) petition for Preliminary Injunction over Compañia Maritima legal battle.

The CPA, earlier,  deployed 24 security personnel to “regain” its possession of the centuries-old property, almost a month after the Regional Trial Court (RTC) Branch 10 granted the CPA’s petition.

The court, in its decision issued last December 2022, enjoined the city government from occupying the entire and any portion of the Compañia Maritima area and from “performing thereon any construction works and all kinds of activities,” interfering with the Republic’s rights and the CPA’s statutory right to “manage, administer, operate, maintain, improve, and develop the entire base port of Cebu.”

In his speech, Garcia emphasized the significance of the Compañia Maritima, being a neoclassical structure built in 1910, to Cebu City.

Compañia Maritima, he noted, was part of the emergence of Cebu as a trading hub during the American commonwealth and was part of the continued growth of Cebu City following independence from colonial rule.

“It predates Cebu City’s own charter. It has stood witness to the resiliency of Cebu City’s peoples during the Japanese occupation, and it continues to define, if not highlight, Cebu City’s skyline from the harbor,” he said.

The City, he said, had to step in and took an active role in the building’s administration, after it was allegedly neglected.

He recalled the condition of the Compañia Maritima before the city initiated development in the area.

“Words like decrepit, decaying, and dismal, were used to describe it decades after it was abandoned by its bankrupt shipping owners in the early ‘80s and possessed by an agency of the national government…It was infested by rats and other insects. People living by the docks made it their restroom. You can hardly go near it because of the smell and the filth. Drug-use paraphernalia are regularly found in this area and people passing by feared for their safety,” he said.