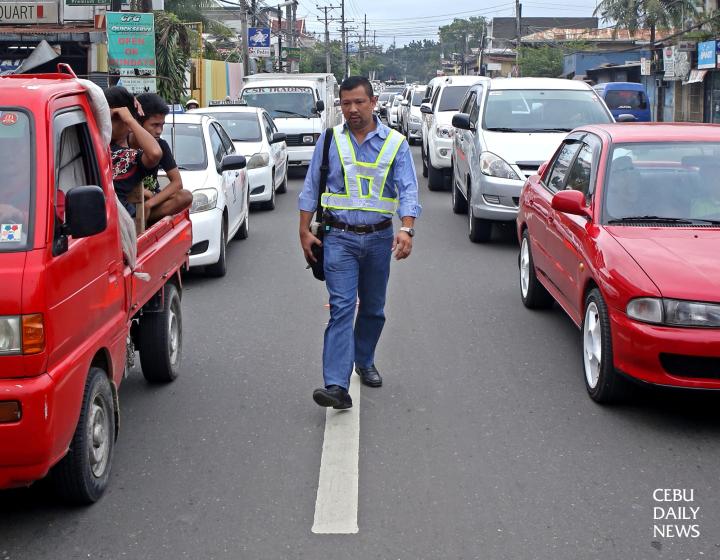 Victor Caindec, new Citom executive director, checks vehicle flow along the Banilad-Talamban corridor on the first working day after the holidays. Should flyover traffic be one-way? The plan was set aside in favor of modifying three road lanes for traffic heading to Cebu City, and one lane for vehicles in the opposite direction. (CDN PHOTO/ LITO TECSON)

All roads should be passable before pre-Sinulog festivities kick off on Friday, Jan. 9.

No road work should block the way.

This was the order of Cebu City Mayor Michael Rama on the first working day of  2015 at City Hall.

“They have to stop. And before stopping, restore the road to make it passable without any potholes. We need all road access available. No obstruction. And we need is traffic to be managed well,” the mayor told reporters.

This includes all national roads undertaken by the Department of Public Works and Highways (DPWH) 7 in Cebu City, he said.

Construction work should be stopped and roads should be restored before January 9, Friday, which is the day of the city government’s launching parade of Sinulog 2015.

On January 8, Thursday, a series of nine-day novena Masses begins at the Basilica Minore del Sto. Niño, a countdown to the religious feast day of the Holy Child who is honored in the annual Sinulog parade held on Jan. 18., Sunday.

Road work can resume on January 20, said the mayor.

Rama said he would send a formal communication to DPWH 7 on this and remind the city government’s Department of Engineering and Public Works (DEPW) as well.

The S. Osmeña Road was scheduled for completion before the Sinulog.

It suffered several setbacks last year when close to a hundred trees along the center island of the road were uprooted and hauled away in April. No party took responsibility for the removal.

Criminal charges were filed against the contractor WT Construction for illegal destruction of trees in a complaint by the Department of Environment and Natural Resources (DENR).

With nine days to go before the arrival of Pope Francis in Manila, there is still no news if he will drop by Cebu.

A dismayed Mayor Rama said he still hopes for a change in the itinerary, although a detour in the carefully crafted schedule of the Vatican is highly unlikely.

The Pope is making a state and pastoral visit, after expressing a strong desire to be with the poor who suffered during super typhoon Yolanda, which has led to a scheduled visit to Manila, Tacloban  City and Palo in Leyte province.

The mayor has repeatedly noted that Cebu is the cradle of Christianity in the Philippines and is “very near” Tacloban City.

He recalled the 2013 earthquake when top national officials, including President Aquino, visited Cebu to check on the situation and stopped by the Basilica Minore del Sto. Nino and the Provincial Capitol but didn’t visit the old Cebu City Medical Center (CCMC), which was rendered unfit for occupancy after the quake.

Looking ahead to the Sinulog and Fiesta Señor, Mayor Rama urged everyone to help make the celebrations a success.

“Sinulog isn’t about me, it’s us. It’s not just the Sinulog Foundation or the Cebu City government. It is incumbent upon each and everyone of us to be united and work hard in making it successful. We need everybody’s help,” he said.

Read Next
Traffic agony is back