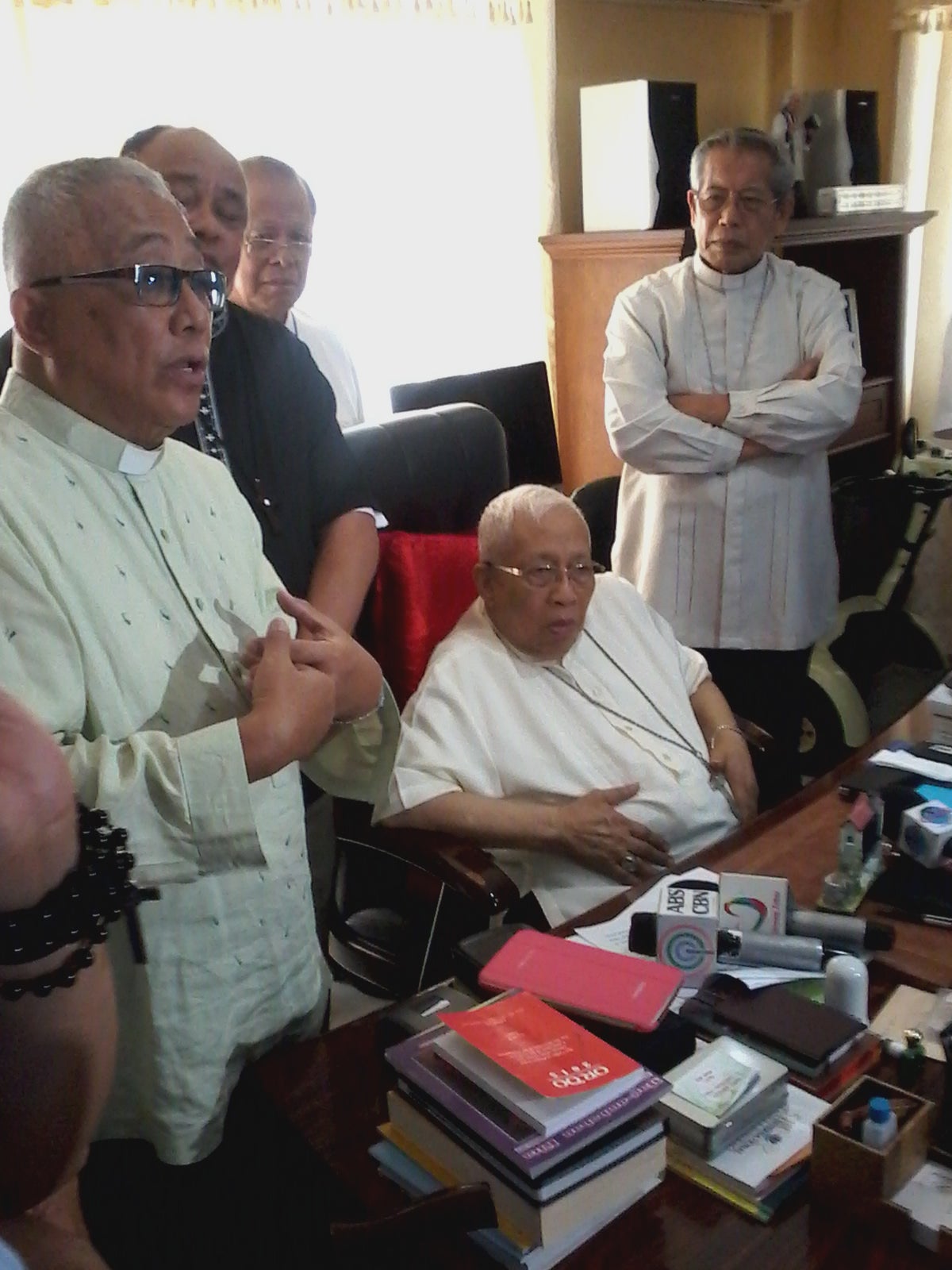 6 bishops repeat NTC call for President to step down
Reg’l police: No interest in coup
Cebu Archbishop Palma not part of resign-campaign

For the second time since October last year, Archbishop Emeritus of Cebu Ricardo Cardinal Vidal added his voice to calls for President Aquino to step down.

Reading a statement at his retirement home in Cebu City, Vidal yesterday referred to the Jan. 25 Mamasapano clash where 44 police commandos were killed.

“Various assemblies convened by the National Transformation Council (NTC) strongly articulated that the President should step down,” he began.

“We, bishops of the Catholic and other Christian Churches, have often been asked if there is a moral basis to this growing demand.  Recent developments have made this call even more urgent and imperative.”

Asked later by reporters if he was personally calling for the resignation of President Aquino,  the 84-year-old Vidal did not say “yes” or “no”.

“I”ve already retired.  (But) it’s in the first sentence. It’s very clear there,” he said.

Vidal said  he was saddened by the violence in Mamasapano and that President Aquino, as commander in chief, had to answer for it.

The retired archbishop held a press conference with five  other Catholic bishops  and three leaders of different Christian denominations, who earlier met with him at his residence in Sto. Niño Village.

The bishops are mostly affiliated with the NTC, an anti-corruption movement which has been seeking the ouster of President Aquino since 2010.

The exception is Cebu Archbishop Jose Palma, who didn’t call for the resignation of the President, but said he deems it proper for the government to create a Truth Commission for the Mamasapano clash.

“I know this is a moment of difficulty in our country.  We leave it to the people… If that’s the sentiment of many, then that’s it,” said Palma, who officiated Mass at Vidal’s residence.

“It’s good to know the real story behind the event: How did it happened? Who were supposed to be responsible? I hope they would bring out the whole truth about the matter and bring about justice to those who perished. There are certainly lessons (here). The idea is nothing like this should ever happen again.”

Also present were Protestant Pastor Art Corpuz of the United Church of Manila, Bishop Butch Beljica of the Christian Bishop and Ministers of the Philippines (CBMP), CBMP secretary general Dr. Jose Socito, a representative of Butuan

Tatad, a convenor of NTC, said they want a caretaker government to fix the system and that the group wouldlater  announce  names of leaders of a  “transformation government” that will be composed of “patriots, nationalists, and men of integrity.”

Archbishop Arguelles said they aren’t singling out President Aquino and that they want Vice President Jejomar Binay and other government officials to resign as well.

“We are not ousting. We want them to step down. We are not for violent change or for a military takeover. We are sure that many of these people who are wounded by this administration are behind our plan to have a new government that will be for the people. We just don’t want to change faces. We want to change hearts.”

Last Oct. 1, 2014 during an assembly of the NTC in Cebu City, Cardinal Vidal, who has accompanied the anti-corruption movement since its founding,  restated in his keynote speech the group’s main declaration in Lipa, Batangas that President Aquino had “lost the moral right to lead the nation.”

“I hope and pray that this Assembly in Cebu , the NTC will have the opportunity to further amplify this issue,” he said at that time, only to qualify later when a controversy arose over his remarks that he did not actually sign the declarations of the NTC or call on  President Aquino directly to resign: “As a retired bishop, I have no authority to do that.”

Yesterday, in Vidal’s residence, the NTC-affiliated bishops in the press conference talked about  President Aquno’s “incompetence and insensitity” and his “mishandling” of the Mamasapano incident.

The group said it is also seeking the ouster of Vice President Jejomar Binay and other government officials.

They said a new government, which respects human values and protects the dignity of people, should be created.

The visitors heard Mass at the cardinal’s private chapel past 12 noon, before the bishops and some lay persons gathered for lunch.

At around 1 p.m., Cardinal Vidal read a statement to the media while the bishops stood behind him.

Vidal quoted the encyclical “Gaudium et Spes”, about the role of the Church “to teach her doctrine and to pass moral judgment in those matters which regard the common good an fundamental rights and freedoms.”

“The Church and her pastors must never abandon their duty to denounce evil and to guide men, women, and children in their active serach for the truth and the good,” said Vidal.

“Moral evil must be removed from the political and social system. This task, the Church and the community cannot just leave in the hands of politicans, no matter how virtuous they might be.”

In the end he appealed to “our fellow bishops and religious leaders of faith-based communities to join us in praying to God for his guideance for the renewal of the nation thaht is deepy rooted in faith values, love of country, and respect for human life and environment.”

The bishops present were vocal about their criticism of President Aquino.

Lipa Archbishop Arguelles, an NTC member, said the Church is against reforms through violence and will never support a coup détat.

“Let us all together work for a new system. Our is a transformation council. We don’t only want transistion but transformation. We had transitions before but it’s from bad to bad or bad to worse. We want to have a transformation from  good to better,” he added.

Arguelles said President Aquino has no moral ascendancy to lead the country especially when he defied the Supreme Court’s ruling on the unconstitutionality of the Disbursement Acceleration Fund (DAP).

“Our problem now is morality. The government that we have is not only unconstitutional and illegal but also immoral. The faith communities have been gathered together and have been pleaded to help in rebuilding our nation,” he said.

“When he made the welcome remarks, instead of stating something positive or beautiful about our country, he mentioned something negative. That’s not the way to welcome someone. He started hitting us. Never mind if he hit me alone. But he’s hitting the whole clergy. Thats the most embarrasing kind of welcome that I ever have heard from a statesman,” he said.

But Villena clarified that he has a deeper reason in asking the president to step down – “lack of competence.”

“It would be a great gesture of patriotism on the part of the President Benigno Aquino to step down,” he said.

Archbishop Dela Cruz of Zamboanga said he was disappointed with Aquino’s “insensitivity” when he visited the city on Jan. 25, the day of the Mamasapano clash.

“We were so disappointed. He was not grieving with us after all.  He was not even present when the dead bodies of the Fallen 44 arrived at the Villamor Airbase.”

Read Next
Stop playing to the gallery