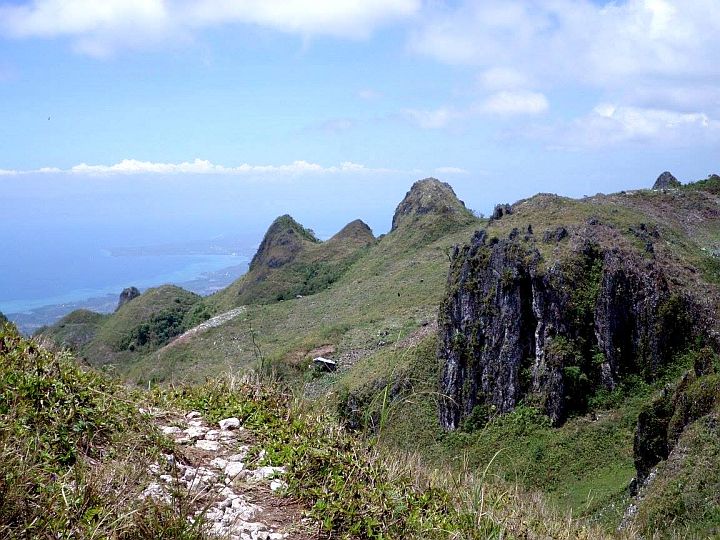 AT THE peak, you are guaranteed an excellent view of the southern side of Cebu.

ADVENTURE is a word too often used these days. Every outing, every unknown is an adventure.

I have this fascination for climbing and heights. This time I targeted the highest peak in the province of Cebu—Osmeña Peak in Dalaguete, which is a two-hour drive from the city’s capital.
My wife Jing and I started our hike at the Mantalongon market, where an eight-year-old boy offered to show us the way.The barangay road is rough and hiking takes an hour or
two until the foot of Osmeña Peak. (Climbers can either walk or ride a “habal-habal” to get there.) The summit is around half an hour away. A water source is located along the trail to the summit.

The neighboring mountain ranges of Osmeña Peak are mostly jagged and  rocky, the very trademark of the area. And then there arealso those that resemble Bohol’s Chocolate Hills, albeit bare to thinly forested because the locals farm most of the lands.
At the peak, one can have a 360-degree view of Cebu South (more the southwest side) plus a glimpse of Negros Island.

It’s a relatively small clearing as far as space is concerned, but on that day, there were only six of us so we didn’t really have to jostle for space. Everything in sight was brown with some patches of green, which was understandable because of the intense heat of the sun … well, at the top there’s a bit of cool breeze.