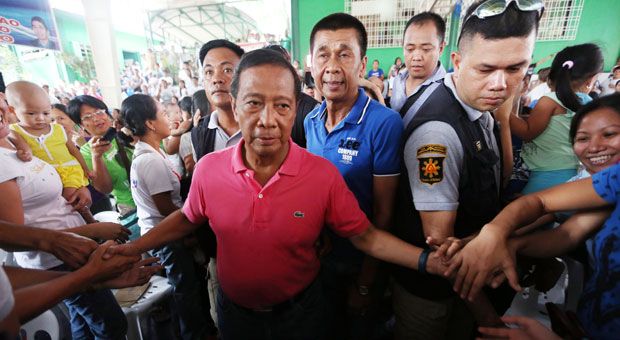 Vice President Jejomar Binay on Wednesday visited three public markets in three towns of Rizal, but denied that he was already campaigning for the 2016 presidential elections. He claimed this was part of his official duties.

But Binay was very much in campaign mode, distributing free wheelchairs, making promises and taking a swing at his imagined opponents.

His supporters could be seen distributing Binay fans and t-shirts emblazoned with “Kay Binay, gaganda ang buhay” (with Binay, life will be better).

Visiting the public markets of San Mateo, Rodriguez and Cogeo, Antipolo, Binay shook people’s hands and allowed them to have their photos taken with him.

Speaking before the people gathered at Cogeo covered court, Binay made an outright play for Antipolo’s voters, noting that in the 2010 vice presidential race, he won 35,000 votes over Interior Secretary Mar Roxas in Antipolo and thanked the people for it.

With Antipolo’s population now grown bigger, he said he believed he would get more votes, perhaps as high as 50,000 next year and was thanking Antipolo residents in advance.

As is customary in a campaign sortie, Binay took a swing at his likely opponents in 2016.

He suggested that the media look into the massive war chest of the ruling Liberal Party (LP). He said the funds amassed by the LP when compared with those of his party was a case of “David and Goliath.”

Binay also said the main issue for 2016 would be the “experience” and “capability” of the country’s next leader.

RELATED STORY:  VP Binay, like Grace Poe I was adopted

Read Next
Manila contractor bids the lowest for CCMC project