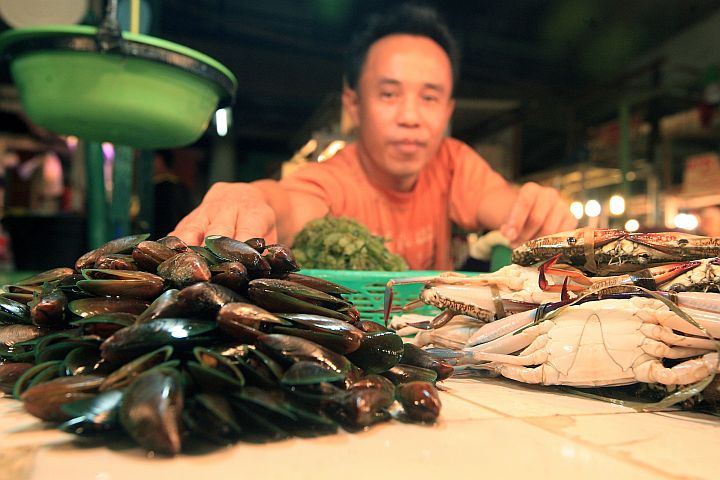 A vendor in T. Padilla Public Market continues to sell mussels despite a red tide alert banning the gathering and eating of shellfish from Dauis, Bohol.(CDN/TONEE DESPOJO)

All kinds of shellfish and alamang (Acetes sp.) gathered from Dauis, Bohol are not safe for eating.

Fish is safe, but the gills and intestines must be removed before cooking. Squid, shrimps and crabs are also safe, but they have to be fresh and washed thoroughly. Avoid eating them raw.

The Bureau of Fisheries and Aquatic Resources (BFAR) has issued a red tide alert advising against eating, gathering, harvesting, transporting and marketing of shellfish and alamang from Dauis, Bohol.

“Based on the results of red tide monitoring activities of the BFAR central office in coordination with the local government unit, shellfish samples are positive for paralytic shellfish poison (PSP),” the advisory, issued on Wednesday, said.

Dr. Allan Poquita, BFAR-7 assistant regional director, said the ban would last for one month, or until the toxicity level has gone down below the regulatory limit.

He said red tide, the common name for harmful algal bloom, could also occur in Cebu. Red tide occurs when there is a high concentration of algae, usually after a drought and strong rainfall. Some of these algae produce toxins harmful to humans.

“Yes, there’s a possibility especially since we now have heavy rains after a dry spell,” Poquita told Cebu Daily News.

He said fisheries personnel and Bantay Dagat members are closely monitoring the Bogo-Medellin Bay in northern Cebu. In Bohol, BFAR is monitoring Maribojoc Bay, which is partly bordered by Dauis.

As of yesterday, the number of people hospitalized for paralytic shellfish poisoning in Bohol has risen to 17. Six have been discharged.

Poquita said most of the victims are coastal dwellers who are “gleaners,” or those who gather shellfish in the foreshore and eat it for personal consumption. Poquita said they ate “tahong” and “litob.”

They ate shellfish taken from the coastal waters off barangay Totolan and Songculan in Dauis town and barangays Poblacion II and Booy in Tagbilaran City.

Laboratory tests on shellfish samples taken from Dauis confirmed a harmful level of the microorganism that causes shellfish poisoning. The test results in Cebu were confirmed in Manila lab tests.

The coastal water of Dauis is not a major fishing ground, but its proximity to the beach resorts in Panglao has raised concerns in the tourism industry.

As of yesterday, tour operator Alice Queblatin said the red tide in Bohol “is not a problem, but the tourism sector will be watching it closely.”

“We are not affected by the red tide as of the moment. The red tide is more in Dauis and is under control,” she said in a telephone interview.

Queblatin, Tourism Congress vice president for travel and tour group for Visayas, said they still have clients going on tours in Loboc and other popular destinations in Bohol.

Aside from posing public health risks, red tide also impacts negatively on coastal communities and could lead to the collapse of the shellfish industry in the area.

Dauis Mayor Miriam Sumaylo said about 60 fisherfolk in barangays Songculan, Totolan, Tabalong and Bingag have been affected as of Friday.

Sumaylo said they distributed 5 kilos of rice and canned goods to each affected family.

In Cebu City, market administrator Raquel Arce said her office will monitor the entry of shellfish from Bohol. She was not aware about the shellfish ban until CDN called her up.

Vendors at the T. Padilla public market were still selling shellfish yesterday. One of the vendors, Charlito Inso, said he was not aware of any red tide alert.
“I don’t know anything. I’m just here to sell,” he said. The crabs and clams he was selling yesterday came from Bohol, he said.

Fisheries personnel in Bohol are monitoring the surrounding areas for red tide toxins.

Maribojoc Bay is bounded by the towns of Maribojoc, Cortes, Dauis and Panglao as well as the city of Tagbilaran.

He said he has also asked Maribojoc and Cortes officials to avoid harvesting and eating shellfish pending the results of the laboratory tests.

Water and shellfish samples will also be collected from Cogtong Bay in Candijay, Cabulao Bay in Mabini and the seawaters of Ubay-Talibon towns.

Bohol Governor Edgar Chatto has advised residents of the entire province to avoid eating any type of shellfish until the waters are cleared of toxins. All local government units were directed to stop selling, gathering and transporting shellfish while the BFAR ban is in effect.

“It’s better to take precautionary measures than waiting for something bad to happen,” he said in Cebuano.

This brought to 17 the total number of victims since Friday last week. Of the total, six have been discharged, Bongalos said.

He said the victims suffered from headaches, stomachache, swollen lips, numbness and nausea.

Poquita, one of the speakers of the Philippine Press Institute training seminar on Reporting on Marine Environment Issues in Moalboal yesterday, said the microorganisms that cause red tide exist in all seas.

A high concentration of these microorganisms usually occurs after a drought and strong rainfall, when substances are washed into the ocean causing an increase in nutrients that trigger the red tide phenomenon.

Water is discolored, although it is not necessarily red. Red tide could also cause fish kill because the microorganisms could deplete oxygen in water. /With Vanessa Claire Lucero and UP Cebu Intern Mary Claire U. Catado

READ: Market chief: No ban on sale of shellfish

Read Next
Over 100 families displaced after huge Mambaling fire