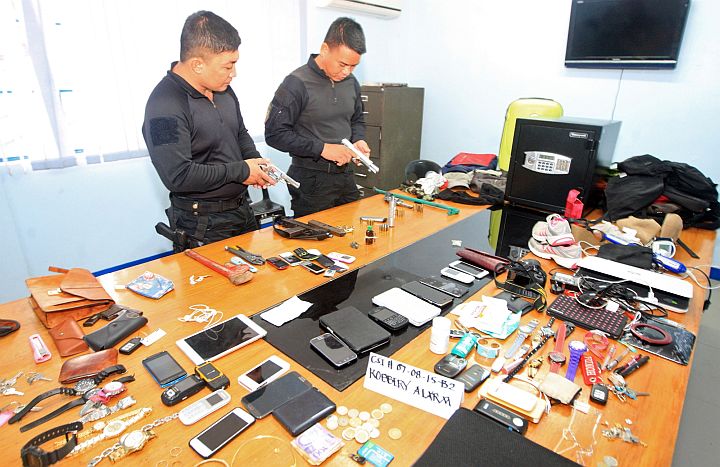 A BUSINESSMAN and his family  were held at gunpoint by ex-convicts who invaded his home at 3:30 a.m. yesterday in Gemsville Subdivision in Lahug, Cebu City.

The five robbers left with  cash and valuables on board the family’s Toyota Hi-Lux van, but were later arrested by police before they could exit the village gate.

Police later recovered  more than P260,000 cash and about P800,000 worth of jewelry, cellphones and other gadgets as well as the  van.

Businessman Victoriano Pagador said the armed men entered  his house when his    helpers  arrived at dawn from Carbon Market.

Then they  tied up  Pagador, his wife, his granddaughter and her three classmates who had stayed for the night for group study.

Pagador said he pleaded with the robbers not to harm them. He told  the intruders  to take whatever they wanted.

One maid  was able to free herself and run to the bunkhouse where the family driver was  sleeping.

Alerted about the robbery, the driver sought the help of village guards who were able to stop the robbers  at the gate.

A delivery truck of a construction firm also helped in blocking the exit. Guards then called the police. Shots were fired but not one was injured.

The units that responded were the Special Weapons and Tactics (Swat), Theft and Robbery Section (TRS) and the Investigation and Detection Management Branch (IDMB) of Cebu City Police Office.

Seized from the suspects were several firearms including an Ingram submachine gun with 17 ammunition, a caliber .45 pistol and two .38 caliber revolver.

The stolen items were found inside Pagador’s Hi-Lux.

During police interrogation, the suspects admitted that they arrived in Cebu on Sunday and cased the Pagador residence on Monday.

One of  the suspects  went to the village to  conduct their own surveillance.

They will be facing robbery in band charges./ WITH UP Cebu Intern Julienne Hazel E. Penserga

Read Next
‘Time to catch rain’