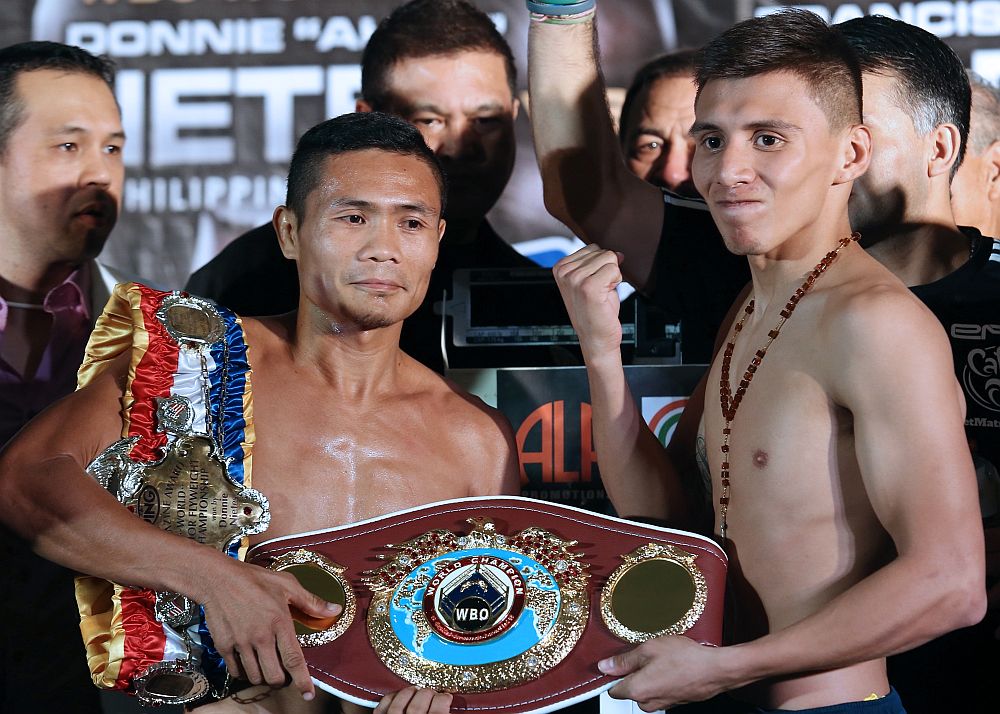 The much anticipated clash between two reigning world boxing champions is on.

Both ring warriors passed the test of the weighing scales yesterday at the packed Event Center of SM City Cebu.

The weigh-in was witnessed by none other than WBO president Francisco “Paco” Valcarcel who will also supervise the world title bout tonight.

Valcarcel surprised Nietes when he gifted the latter with the rare “Super Champions Ring” after the weigh-in.

“Of course it gave me extra motivation to give a great performance. It invigorates me and makes the fight more exciting,” said Nietes, the longest reigning Filipino world champion who vowed to silence the cocky Mexican and avenge fellow Ilonggo and former WBO world minimumweight king Merlito “Tiger” Sabillo who lost his title to Rodriguez last year in Mexico.

“A lot of fans are waiting for this. They want me to avenge Sabillo’s loss and me too, I personally want to avenge his loss so I’ll do my best to win and knock him out,” Nietes said.

And the revenge factor could be the reason why tickets are being gobbled up at unprecedented pace.
“This is the biggest ticket sales we’ve had over the years. We are expecting a sold-out venue tomorrow (tonight) because everyone’s excited to watch two world champions fight,” said          Aldeguer.
BEST
PERFORMANCE
Nietes, 33, vowed to give his best tonight not just to determine who’s the better champion but also to make sure he’ll be leaving the light flyweight division on a triumphant note.
ALA Promotions International CEO Michael P. Aldeguer bared his plans of elevating Nietes to the 112lbs division.
“He must win impressively to convince us that he is capable of moving up to the 112lbs division. We don’t want to make a mistake if we rush him to move up in weight,” said Aldeguer.
“We will assess his performance after the fight and see if we can work out his first 112lbs division fight with a big name opponent.”
Nietes could face world champions Juan Francisco Estrada and Roman Gonzales if he moves up to the flyweight class.
LOADED
UNDERCARD
In the undercard, unbeaten Boholano prospect Mark “Magnifico”Magsayo and his Mexican foe, Rafael “El Guerririto” Reyes came in at 126lbs and 124lbs, respectively for their 12-round fight for the IBF Youth featherweight title.
Amateur stand-out Kevin Jake Cataraja weighed in at 113lbs for his first professional bout while Indonesian Ardi Tefa tipped the scales at 111lbs.
Two Mexican cruiser weights, Jorge Kahwagi and Ramon Alejandro Olivas stole the spotlight yesterday when they almost came to blows  during weigh-in for their 6-round cruiser weight battle. Kahwagi weighed 194lbs while Olivas came in at 191lbs.
Former world title challenger, Roli “Zuma” Gasca and his Indonesian foe, Rasmundin weighed in at 125lbs and 123lbs respectively for their 8-round bout. The rest of the card: Vic Saludar (106 lbs) vs Michael Kaibigan (106lbs); Elmo Traya (138) vs Bryan Macamay (136); Virgel Vitor (116.75) vs Carlo Demecillo (113.5) and Raul Yu (115.5) vs Richard Sueno (115.5).
Ring action starts at 6 p.m.