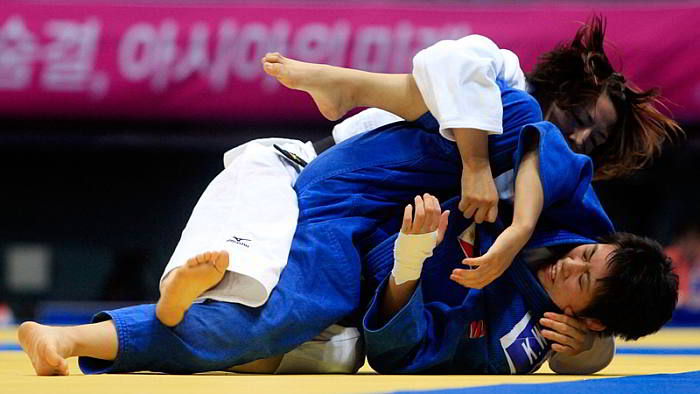 Kiyomi Watanabe (in blue,top photo) competes in one of her more recent competitions.

An 18-year-old Japanese-Filipino, born and raised in Cebu, gave the Philippines a gold medal in the 28th Southeast Asian Games.

Kiyomi Watanabe retained her Asian Junior Champion crown in judo after scoring an ippon in the 3:36 mark to defeat Senatham Orapin of Thailand in the women’s 57-63 kg. finals last June 7.

She will represent the Philippine Team next in the International Judo Federation in Rio de Janeiro, Brazil in August.

A gold medalist in judo since grade school in Japan, Kiyomi’s ultimate goal is to compete in the Olympics and win another gold medal for the Philippines.

This was why she ditched volleyball, her first sports, and trained in judo, initially without her parents’ knowledge.

Her Cebuana mother, Irene Sarausad Watanabe, said she and husband Shigeru, were shocked to learn about their daughter’s judo expertise when they were invited to her first tournament in Yamanashi, Japan in 2006.

All the while, she said they thought she was training in volleyball.

Mrs. Watanabe said they even bought her all the gear she needed for volleyball. When Kiyomi competed in her first tournament, she wore a borrowed, ill-fitting judogi, the loose kimono-style uniform for martial arts.

“Na-shocked gyud mi sa iyang Papa. Nihilak ko (Her father and I were shocked. I cried) when we were invited to watch her first judo tournament in 2006 because we were expecting to see her play volleyball. I cried not just because I feared she might get serious injuries, but also because I saw her wearing a loose judogi, which she had just borrowed,” said Mrs. Watanabe said, who serves as her mental coach and mentor.

“It brought me to tears when I found out that she kept it a secret from me and her father,” she added. 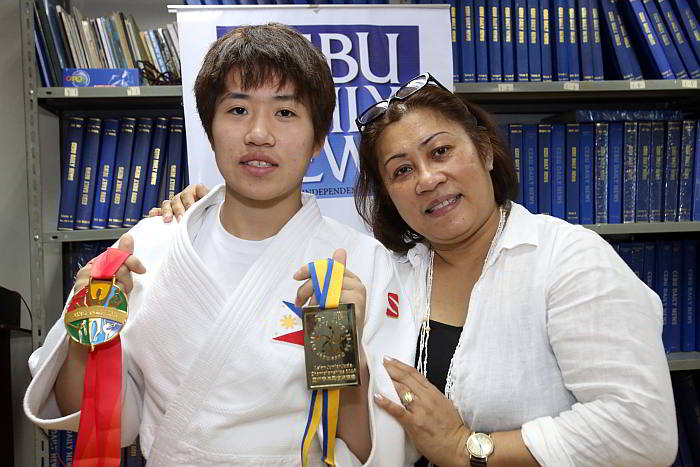 The 18-year-old shows her 2014 Asian Junior Judo Championship gold medal and her 2015 28th SEA Games gold during a visit to the Cebu Daily News with her mom. (CDN PHOTO/ JUNJIE MENDOZA)

At the age of 7, she went to Japan to finish grade school. It was in Dai-2 Elementary in Fujiyoshida that she met her close friend Nana Hayakawa, who introduced her to judo. Nana was a judo champion, representing Kudo Jiku judo club in Japan.

Kiyomi did not tell her parents at first, fearing they might not approve because of the risk of physical injuries.

Mrs. Watanabe said she thought Kiyomi was being lazy when she skipped volleyball practice, not knowing that her daughter was practicing judo 12 hours a week in Kudo Jiku.

Kiyomi, for her part, said she switched to judo from volleyball because she thought she has better chances of winning a gold medal as an individual, instead of being part of a volleyball team.

She represented Kudo Jiku in her first tournament, a regional competition in Yamanasi in 2006. She was ten years old.

TRAINING
With her parents’ support, Kiyomi juggled her studies and judo practice of two hours every Monday, Wednesday and Thursday. Her efforts were not in vain. She earned gold medals when she was in 5th and 6th Grade.

Her feat caught the attention of Aihara Junior High School, which trains students who excel in judo. Aihara has its own judo club, Yoshida Club in Kanagawa prefecture.

Kiyomi had to stay in the Aihara dormitory, away from her parents.

“It was heart-breaking for me to be away from my daughter. She was young and I did not want her to leave but I also did not want to be a hindrance to her goals,” Mrs. Watanabe said.

Kiyomi underwent rigorous training at Aihara, starting with a daily warm-up routine of running up and down a 500-step staircase several times. In the evening, she had practice for 3 hours. On top of this, she had to do her own laundry.

There were 25 women and 35 men in the judo class for Yoshida Club. For her to become a regular team member, Kiyomi said she had to excel.

“It’s okay to fail prepared than to fail because you never prepared,” she always tells Kiyomi.

It was the athlete’s mother who found a way, through social media, for Kiyomi to join the Philippine Team.

Philippine Team head coach Rolan Llamas asked to meet with them in Tokyo in 2011, when the team went there for a tournament.

With the support of Kiyomi’s Japanese judo instructor, Yazaki Yuta, she was able to play for the Philippine Team and later return to the Philippines.

Kiyomi was in senior high school when she represented the Philippines in the women’s 63-kg. category in the 26th Southeast Asian Games (SEAG) in Indonesia in 2011. She earned a bronze medal.

Two years later, she earned the gold medal in the 27th SEAG in Burma (Myanmar). In September 2014, she represented the Philippines and ranked 7th in the 63-kg category in the 17th Asian Games held in Incheon, Korea.

In December last year, Kiyomi represented the Philippines in the Asian U18 Championship in  Hainan and won the bronze medal.

Last April, she represented the country again in the Asian U21 Championship in Hong Kong and earned another gold medal. This she retained when she competed in the 70-kg category in the 28th SEAG in Singapore.

Kiyomi has been nominated for the 2015 “The Outstanding Young Filipinos” award given by Junior Chamber International.

Read Next
Cesafi to come down hard on erring parties