Slain trader a ‘good man’ who provided for the poor 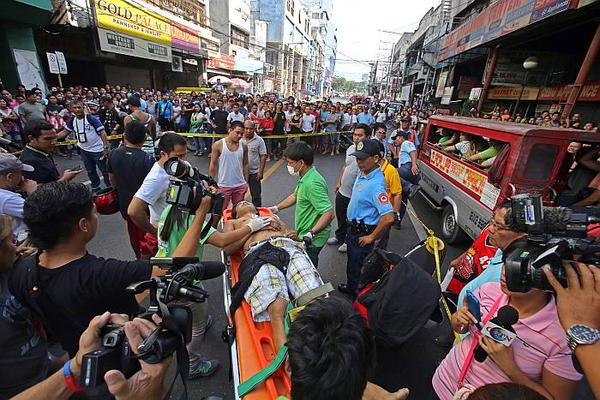 Neighbors of slain businessman Jaime Villaceran in  barangay Lorega San Miguel  said he was  a kind-hearted person who helped pay for the medical bills of the poor.

“He would help the sick, he was  approachable. During the fiesta, he would give a donation and finance the uniforms and snacks of the basketball team,” barangay councilman Julius Espina said.

He also contributed to building the village chapel.

Police said the businessman, who was gunned down on Colon Street by motorcycle-riding assailaints after driving his children to school,  was on their watch list of suspected drug operators.

But he had no criminal record in the barangay, said Espina. He said  he heard rumors of   Villaceran’s drug links but that there was no hard evidence to show that.

Santander said witnesses told investigators that before  Tuesday’s ambush, one of the two gunmen was already following Villaceran to his house in Lorega San Miguel.

He said  the suspect is still in the Metro Cebu area.

“The relatives are cooperating but they refused to elaborate and did not comment on the drug rumors,” he said.

Cebu City Mayor Michael Rama’s first reaction after news of the ambush  reached him was “Where were the police?” since the murder took place in the city’s busiest junction downtown past 7 a.m.

Supt. Noel Lomente, chief of the Carbon police precinct, said two police officers and a police recruit were near a hotel along Sanciangko Street.

Cebu City has 30 CCTV cameras in major roads but Councilor Dave Tumulak, who heads the city’s Command Control Center (C3) said there was none positioned with that vantage point  during the ambush.

“We didn’t get footage because the camera in Colon Street was facing backwards from the area where the incident took place,” he said.

But Tumulak said they will ask nearby stores if their security cameras were able to record the incident.

Lomente said that based on initial investigation, the ambush was done by professionals killers.

“As Councilor Tumulak said we are looking into the security cameras of the stores. But most of these cameras focus on the entrance and sidewalks (near their premises).

You seldom see passing jeepneys in these footages and that’s why we are still struggling in identifying the suspects,” Lomente said. /With Palompon Institute of Technology Intern Jay-Ileen Engalla

TAGS: Jaime Villaceran, Slain trader a ‘good man’ who provided for the poor