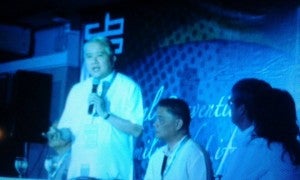 Be holy and aspire to become saints.

This was the challenged posed by Lingayen-Dagupan Archbishop Socrates Villegas to the lesbian, gay, bisexual, and transexual (LGBT) community during a convention on family and life by Catholic leaders in the country.

Speaking to about 400 people, Villegas, president of the Catholic Bishops’ Conference of the Philippines (CBCP), said the LGBT community have always been a part of the Church and its mission to draw humanity to the Lord.

“That first thing we should call to mind is Jesus died for all. At the cross, there were only seven words attributed to Jesus, and at the cross, He did not ask ‘Are you a homosexual? If you are, I’m not dying for you. No. There was no such thing,” he said.

While the Catholic Church denounces same-sex union, Villegas said homosexual is not a sin in itself.

“We do not judge. We constantly bring to them God’s invitation ‘Come follow me. Come and be holy. Come and be a saint.’ That is a call given to all of us,” he said.

The prelate said the CBCP will issue by the end of August a pastoral letter on the care of homosexual persons, as well as the church’s doctrine and position with regard to same-sex unions.

Villegas admonished people to be careful in using the term “marriage” and never to apply it for persons who agree to have relationships with same sex.

“Number one, it (same-sex union) is not a marriage. It is an agreement, a union, or call it whatever it is, but it is certainly not marriage,” he said.

While the Church has been criticized by some people for opposing same-sex union, Villegas said they will always remain faithful to the truth that the Lord has taught.

He described same-sex relationships as “a tragic error of humanity.”

“We must be firm in proclaiming the truth.  It is in Gods’ plan that a man and a woman enter into that Sacrament of Matrimony which Jesus Himself instituted,” he said.