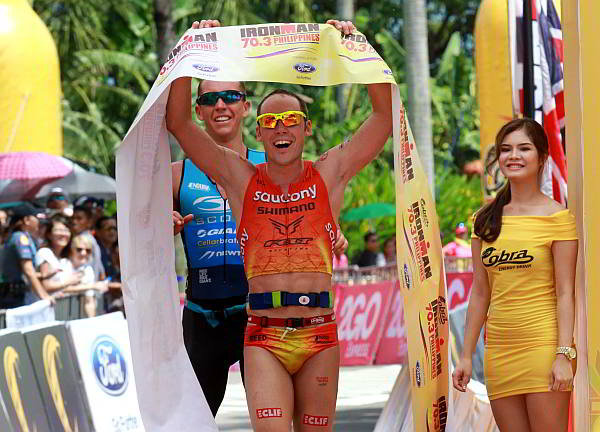 Two Australians raced each other to the finish line ahead of the pack before one of them ended up on top in this year’s Cobra Ironman 70.3. Tim Reed emerged as this year’s champion. Tim Van Berkel was only two seconds behind. (CDN PHOTO/ JUNJIE MENDOZA)

When Tim Reed of Australia competes in races abroad, his wife is left at home, watching their two young kids.

He knows it’s a tough task for his wife. So he makes it a point that every time he races, he goes home with something to show.

Yesterday, Reed did just that as he topped the men’s pro division of the Cobra Ironman 70.3 Philippines in dramatic fashion at the finish line at Shangri-La’s Mactan Resort and Spa.

“I’ve got a wife back home, a baby boy and a three-year-old son. It’s tough for her looking out for the boys,” he said. “So when I go away to race, I make sure always that it’s going to be worthy.”

It was actually a close win for Reed, who slipped and stumbled inches from the finish line with Van Berkel just a few steps behind. Fortunately, he managed to recover just in time to finish first. 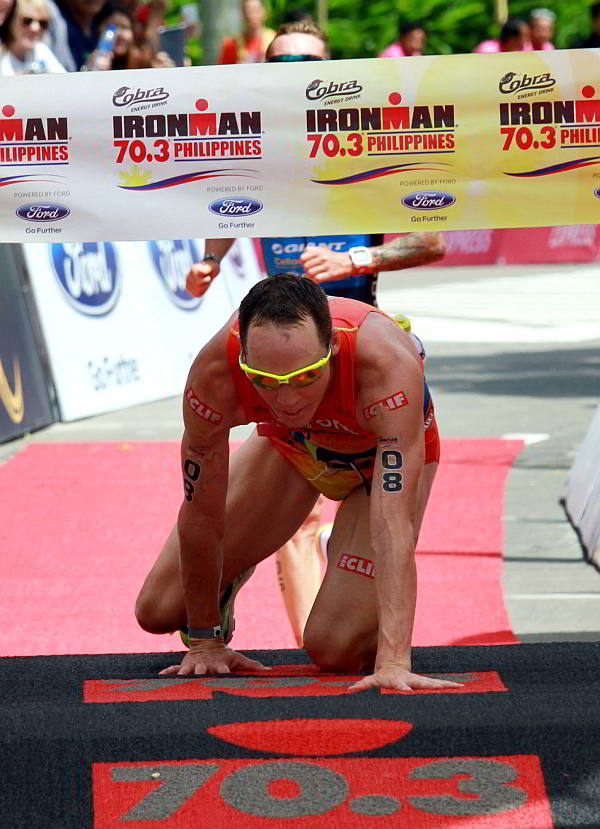 Reed almost lost his chance after tripping just a few inches from the finish line with Tim Van Berkel right behind him. (CDN PHOTO/ JUNJIE MENDOZA)

“It never gets easy,” he said. “This is one of the most difficult races I have done purely because Tim Van Berkel pushed me so hard the whole way.”

Reed made his debut here in the country in the 2015 Century Tuna Ironman 70.3 Philippines in Subic, Zambales earlier this year. He also topped that race.

Four of the top five finishers were Australians.

“It was awesome,” McMahon said. “It was a world-class field. You got all those Aussie boys with Crowie (Craig Alexander) and that makes a dynamic race. Those Tim guys, (Reed and Berkel) they are very fast. I wanted to win this. I think I was very ready but sometimes things don’t click.”

FOUR-PEAT
In the women’s race, Swiss three-time defending champion Caroline Steffen survived a crash in the bike leg at the South Coastal Road (SCR) to win her fourth straight title.

Steffen fell off her bike at a crowded area at the SCR but was still able to continue despite some minor injuries. 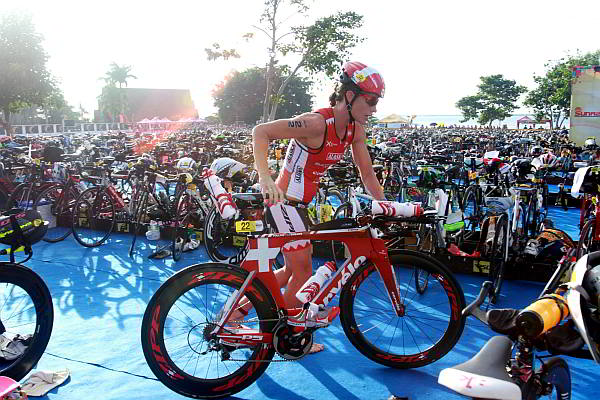 Caroline Steffen of Switzerland gets her bike in the transition area at Shangri-La’s Mactan Resort and Spa.
(CDN PHOTO/JUNJIE MENDOZA)

“I just kept on going because I wanted to finish the race. The lesson is never give up if you can finish the race,” said the 37-year-old Steffen. “I should be back training after a one-week rest.”

Steffen, who completed the race in 4:23:54, explained what caused the crash: “I think about 20 people suddenly crossed the road after someone famous racing passed on at the other side and the people wanted to get a better view. So they all crossed the road. I tried to use the brakes but I couldn’t stop. So I just crashed and fell off, hitting a little girl. The marshals came over and asked if everything was okay. I said ‘yes’ and just kept on racing.”

Beth Gerdes of the USA finished with a time of 4:29.07 for second place while Australian Dimity Lee Duke (4:29.36) finished third.

ACT OF SPORTSMANSHIP
Cameron Brown, who placed 11th in the men’s pro division, received some praises after helping Steffen get back after the crash. Brown finished with a time of 4:22.47. 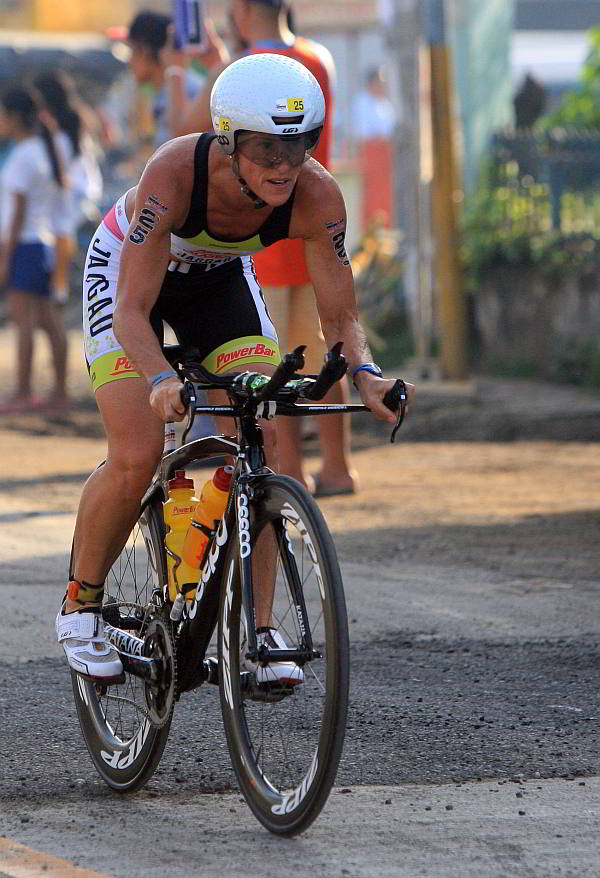 He stopped and got off his bike to help Steffen and even waited until medics and marshals arrived, causing him to lose precious time.

His heroic act was not unnoticed as Sunrise Event Inc. (SEI) CEO and President Wilfred Steven Uytengsu Jr. honored him by creating the “Cameron Brown Sportsmanship Award.” This award will be given to the triathlete who shows selflessness, compassion to fellow triathletes during the race.

“There’s more to winning in triathlon and that is trying to test yourself but often we forget about sportsmanship. Today, we saw one of the great triathletes show tremendous sportsmanship. He put his personal race on hold to take care of his fellow triathlete,” said Uytengsu Jr.

Meanwhile, crowd-favorite Belinda Granger, 45, of Australia was emotional when she crossed the finish line at fifth place with a time of 4:42.00.

The race yesterday was her second to the last pro race after she announced her retirement in 2014 from the coveted division after 20 years in the sport. She promised she will continue joining races here in the country as an age grouper.

Read Next
A newer place for Cohen’s Lifestyle Center