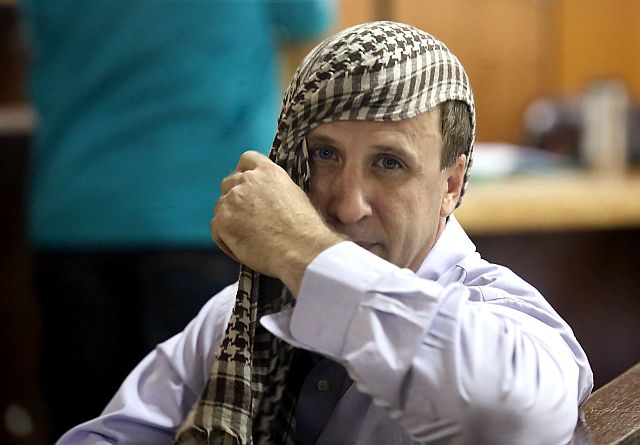 AMERICAN NATIONAL ARRESTED/OCT. 13, 2015: American National Jason Gentry tries to cover his face in Cebu City prosecutor’s office after he was arrested by the agents of the National Bureau of Investigation (NBI7) for violation of the Labor code, illegaly operating a Call Center in Capitol site.(CDN PHOTO/JUNJIE MENDOZA)

AN American tourist was charged yesterday at the Cebu City Prosecutor’s Office for operating a call center in Cebu City without a permit.

Jason Jeremiah Gentry was charged with violating Presidential Decree 442 or the Labor Code of the Philippines after he was arrested by agents of the National Bureau of Investigation (NBI) inside his office last Oct. 10.

The permit is issued by the Department of Labor and Employment (DOLE).

“The government is deprived of taxes his company ought to transmit,” Isidoro said.

He said they received reports that a number of companies are operating without the AEP—a violation of the law.

Gentry kept quiet when sought for comment on the accusations leveled against him.

The issue stemmed from a complaint filed by another business process outsourcing (BPO) company against Gentry.

After conducting an investigation, the NBI secured a search warrant from Judge Samuel Malazarte of the Regional Trial Court Branch 15 in Cebu City.

Isidoro said the American tourist also violated immigration laws for operating a business in Cebu despite being a tourist.