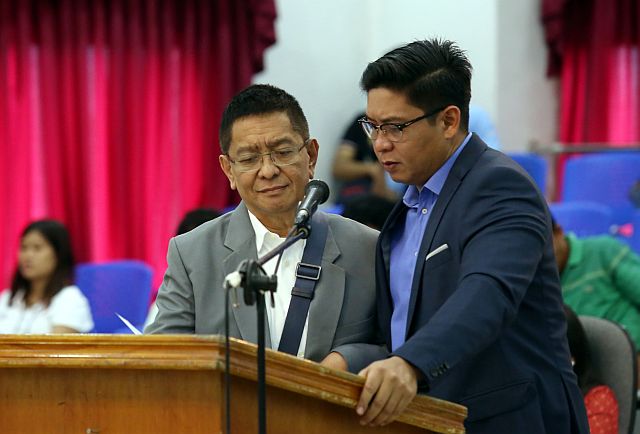 Board Member Arleigh Sitoy (left) and Celestino Martines III approach the podium during the provincial board regular session yesterday afternoon.

Cebu Provincial Board (PB) Member Arleigh Sitoy ‘said he was leaving the Liberal Party (LP) and would run for Cordova mayor under the PDP-Laban.

He was supposed to deliver a privilege speech yesterday at the PB session to announce his resignation as majority floor leader for these reasons but was prevailed upon by former allies not to do so.

Sitoy’s transfer came after his sister, Cordova Vice Mayor Mary Therese Sitoy-Cho, was given a certification of nomination by the Liberal Party to run for mayor.

But Sitoy said he didn’t switch to PDP-Laban because of that.

Sitoy served as town mayor for three terms from 1998 to 2007 before he was elected to the Provincial Board.

He said he chose PDP-Laban because he is comfortable with the group.

Sitoy said PDP-Laban has nobody in mind to field as gubernatorial candidate in Cebu, and that he is free to support his own choice.

“Let me tell you frankly, Winston (Garcia) is my friend, a very good friend,” Sitoy said, referring to One Cebu’s candidate for governor.

“Ever since were in college, we were always there for each other,” he said.

Sitoy’s father, 80-year old Cordova Mayor Adelino Sitoy, said he fielded his daughter to run for mayor because his son Arleigh never listened to him or accepted suggestions.

“I don’t want to go with Arleigh. I am still here even if I am the vice mayor. My running mate believes in me, so I will still be mayor,” the elder Sitoy said.

Mayor Sitoy said he wants a working mayor and that Arleigh was too weak after undergoing a heart bypass operation this year. For example, Arleigh usually wakes up at 10 a.m. or later because he has a hard time getting up early, the mayor said.

Sitoy said he and his daughter agreed that even if she wins as mayor and he assumes the vice mayoral post, he would run the town.

Sitoy said he knew his constituents will vote for both of them.

He said he advised Arleigh to run again for PB member, but he did not listen.

Both the mayor and PB Member Sitoys live in one house, but they don’t see each other often.

“We live in the same house. I just avoid situations where we have to see each other because I don’t want to say something I’ll regret,” said Arleigh.

Though the vice mayor is his half-sister, Arleigh said he has accepted her and his other siblings.

He said he wakes up late because he was advised by his doctor to rest more after recovering from the operation, but that’s not the case now.

Arleigh said his fathers management style, which he compared to ruling the town like a king, was a problem.

He said he will run for mayor because it’s easier for him to campaign in one town rather than having to campaign in the whole sixth district of Cebu, which he represents in the PB.

He also denied Mayor Sitoy’s claim that he pulled out a gun during a meeting with him.

Sitoy said he walked out because of his father’s insistence to allow a Korean businessman to run a marine sanctuary without paying an environmental guarantee fee.

“I realized that he wanted to use Therese as a puppet and I feel sorry for her,” the PB member said.

Read Next
Speed, responsible use of Net pushed