Halloween face change with makeup and a creative touch 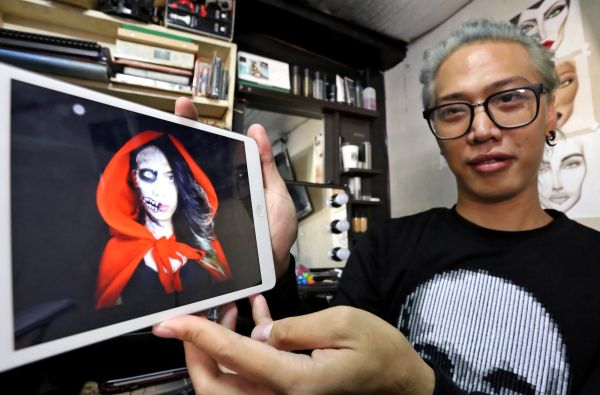 Make up artist, Chad Pantaleon of barangay Luz shows some of his face creations, which he can complete in two to four hours. (CDN PHOTO/JUNJIE MENDOZA)

Want to spend Halloween looking like a  a princess, a hag, a zombie or a famous fictional character?

From being a fastfood outlet crew member, Pantaleon learned to do face painting and prosthetics.

“The owner of the franchise allowed me to apply in a salon. I went to Manila to take up a crash course in  hair style and color,” he said.

The younger of two siblings, Pantaleon dropped out of his Hotel and Restaurant Management course to become the family breadwinner.

He said he decided to learn make up and hair styling since it was an easier investment and could earn more.

Pantaleon said he loves to collect books and magazines about make up and watche tutorial videos on YouTube.

“My favorite make up artist is Rick Baker. I want to have my own name in the industry,” said the 27-year-old makeup artist.

Pantaleon said he would rather focus on his work than attend evening parties.

He uses himself as model and applies make up on his face.

In  his small studio  at home in barangay Luz, Cebu City, Pantaleon could turn his face into different characters in two to four hours.

“Most of my inspirations are movie characters. Before I do the actual make up, I draw it and put colors. It can be done in a day,” he said.

Some of his creations are  a half-skull face, a sugar skull eskempert, skeleton king, camouflage, white elf, luminous  mosaic, a mermaid and an owl.

With a skilled touch, Pantaleon can transforminto a gallery of characters from animation to movies like Disney’s Frozen characters Jack Frost, Elsa and Princess Anna to X-Men characters like Mystique and Storm.

Pantaleon also painted his face to resemble characters from the novel Memoirs of a Geisha, the children’s tale Red Riding Hood, Zombie Apocalypse and even Mona Lisa.

“Before, most of my creations were  made up of prosthetics, but it took four hours to finish. That is why I started to do  face painting,” Pantaleon said.

Pantaleon said he frist conducts skin tests on the necks of customers to prevent skin irritation and infection.

He said he spends at least four hours to complete the prosthetics and two hours for face painting.

Pantaleon taught makeup to 20 students in a summer class.

He also had clients who wanted to hold a zombie-themed party in a big hotel in Cebu City.

He said he dreams of doing makeup for a local or international film as well as put up his own salon and studio.

“Of course I will resume schooling soon and take up Fine Arts,” he said.