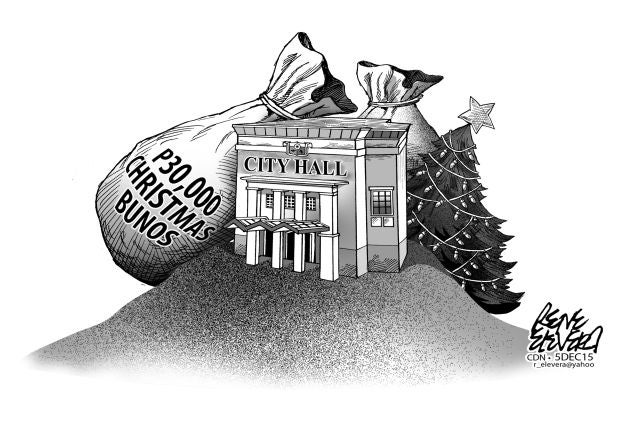 Both the Rama administration and his critics in the City Council want to bring  yuletide cheer  to Cebu City Hall employees, ideally  before their Dec. 18 Christmas Party.

This explains the timing of  Supplemental Budget 2.

At P206 million, it is barely 10 percent of the P2.8 billion Supplemental Budget No. 1 which has been dragging, without action for approval or rejection, in the Council since August.

For once, both sides of the political divide agree on a common cause.

It will be interesting to see how quickly the “Santa Claus” SB No. 2 gets  approved during a special session on Monday called for this all-important agenda.

For  4,800 casual and regular employees, as well as  officials,  City Hall personnel have  all the more reason to smile and agree that, yes, it’s beginning to look a lot like Christmas.

The proposed P30,000 across-the-board  bonus will be the biggest yearend bonus  granted for personnel by the city government.

It is calculated to take the sting out of forfeiting a one-month Productivity Incentive Enhancement (PEI) granted nationwide by President Benigno Aquino III for  2015.  That one-time incentive is good as gone for Cebu city employees, because it forms part of the contentious P2.8 billion SB 1, which the Bando Osmena-Pundok Kauswagan bloc will never pass in the Council.

SB2 is a consolation prize.

For Cebuano taxpayers, this game of haves-and-have-nots can be perplexing.

Why is it so easy to agree on a fat Christmas bonus for casual and regular government employees, but footdrag on  budget matters for essential public services like drainage, garbage collection, and road repair in SB No. 1?

How did the City Treasurer discover  “savings” to cover P151 million for the bonus?

Just a day earlier, City Councilor Noel Wenceslao, a former banker,  was pleading with the BO-PK bloc to lift deferment of SB1 and pass the budget  to allow the city to wipe out its outstanding loan balance for the South Road Properties (SRP).

He showed the math: pre-paying the outstanding balance before Dec. 31 would reduce the total  obligation and   let the city “save” P524 million.

Its all well and good, to ensure a yearend bonus for hard working government employees if there’s money to spare. What is City Hall’s priority? Shouldn’t we  try harder to find benefits for Cebu City’s taxpayers?

Read Next
50 Uber cars on hold in Cebu