The defending titleholders San Miguel Beermen showed the stuff that champions are made of as they battled back from a 22-point deficit to flatten the Rain or Shine Elasto Painters, 109-105, in Game 1 of their 41st PBA Philippine Cup best-of-seven semifinals series last night at the Mall of Asia Arena.

Things looked bleak for the Beermen as they stared at a 20-point deficit, 71-91, at the start of the fourth after the Elasto Painters could do no wrong. 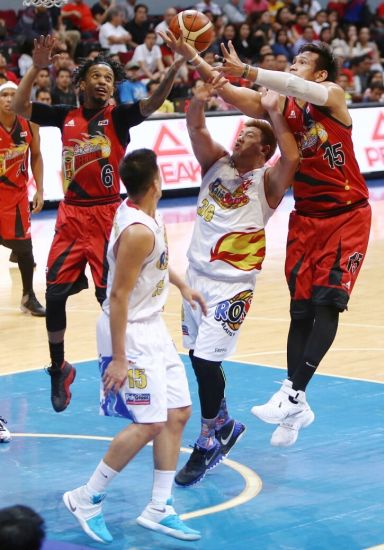 June Mar Fajardo grabs a rebound over Rain or Shine’s Beau Belga in Game 1 of their Best-of-7 semifinal series of the 41st PBA Philippine Cup at the Mall of Asia Arena last night. (INQUIRER PHOTO)

That was until the Beermen decided to blaze their own path behind the defensive prowess of Chris Ross, who had a total of seven steals, to the clutch shooting of Ronald Tubid, who notched 11 of his 15 points in the final 12 minutes of the game.

Cebuano giant June Mar Fajardo also had a monster game of 36 points and 18 rebounds punctuated by a fadeaway jumper that gave San Miguel a 105-103 lead, 1:59 to go.

The comebacking Paul Lee, playing for the first time this season after recovering from a knee injury, tied the match for the last time with a jump shot from the baseline several seconds later.

But Ross had the final say. With the  shot clock winding down on San Miguel’s offensive, Ross launched a triple from way out that hit nothing but the bottom of the net to give the Beermen a 108-105 lead, 1:32 to go.

The Elasto Painters had several chances to come close or tie the game but squandered them all.

Santos was all over the floor and stuffed the stat-sheet 19 points, 17 rebounds, five assists, a steal and a block.

Meanwhile, the other semifinal match-up between GlobalPort and Alaska heats up today in Game 2 as the upstarts Batang Pier look to build on their morale-boosting 107-93 win over the Aces in Game 1.