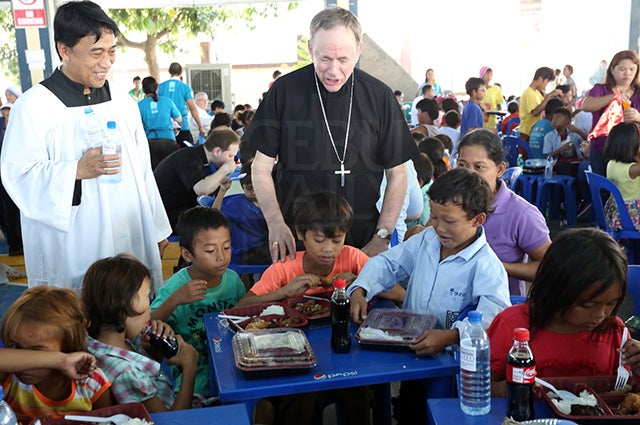 Archbishop Michael Miller of Vancouver, Canada (in black) joins children at the Table of Hope, a lunch shared with almost 1,000 children and their parents who come from poor families in Metro Cebu. They were served “humba” (pork stew), fried chicken and rice, a meal following a Mass to involve the “poorest of the poor” in the 51st Eucharistic Congress which formally opens today in Cebu City. (CDN PHOTO/JUNJIE MENDOZA)

All eyes will be on Cebu City starting today as the 51st International Eucharistic Congress (IEC) unfolds.

Thousands of Catholic faithful, including many of the 12,000 delegates from 71 countries who registered for the conference, are expected to fill the  Plaza Independencia and its adjoining streets  for the 4 p.m. opening Mass.

Roads near the venue will be closed at 2 p.m. today.

Cardinal Charles Maung Bo, the 66-year-old archbishop of Yangon in Myanmar, will preside over the Holy Mass in English.

The conference, which brings together some of the biggest names in the Catholic world to share reflections on the Eucharist – the actual presence of Jesus Christ  when Holy Mass is celebrated – is historic.

The last IEC in the Philippines was held 79 years ago in Manila, when Cebu’s Archbishop Emeritus Ricardo Cardinal Vidal was six years old and among the children who received their first communion in the event.

The choice of Cebu as venue underscores its role as the “cradle of Christianity” in the Philippines after Spanish conquistadores arrived in 1521, and gave the native population the icon of the Santo Niño or the Holy Child.

Although many had hoped Pope Francis would attend the congress in Cebu whose date had been adjusted to suit his schedule for the year, supertyphoon Yolanda in 2013, which devastated the Visayas, advanced the Pope’s first Philippine visit to January 2015.

Pope Francis is being represented in the 51st IEC by Bo as papal legatee.

Bo will arrive at the Mactan Cebu International Airport at 8:15 a.m. today.

A welcome reception will be held both at the Mactan airport and the Cebu Metropolitan Cathedral.

Msgr. Joseph Tan, spokesman of the Archdiocese of Cebu, said everything is set for the international gathering which aims to promote an awareness of the central place of the Eucharist in the life and mission of the Catholic Church.

“By God’s grace, we have done everything that is humanly possible to give the world the best IEC ever. There may be some glitches in the process but that would be because of human error, not out of irresponsibility,” he told Cebu Daily News yesterday. 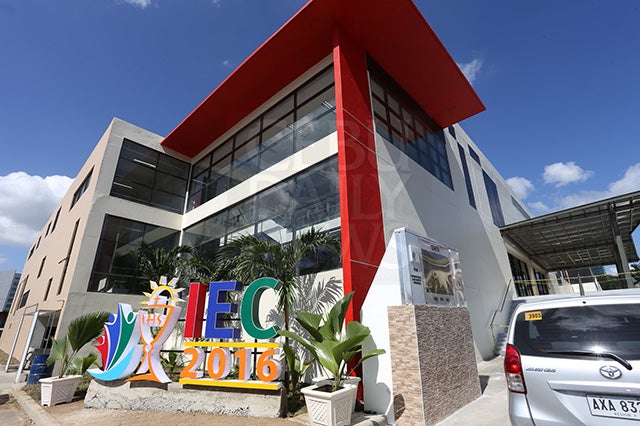 The IEC Pavilion, main venue of the congress, was built for the occasion and can seat 15,000 in the plenary hall. (CDN PHOTO/JUNJIE MENDOZA)

Although the archdiocese is confident of its preparations, Tan encouraged the faithful to continue praying.

“We have to entrust everything to the Lord,” he said.

The Opening Mass takes place in Plaza Independencia against the backdrop of Fort San Pedro, the country’s oldest stone fort.

The plaza, with its old acacia trees and sprawling grounds, is in the center of Cebu city’s historic district and is one of the few public parks in the metropolis.  The park is frequented by ordinary families, youth barkadas and dating couples. It’s also been the venue of political rallies and vigorous debates of different religious groups.

Hymns in the Mass today will be sung by two choirs  – the Koro de San Agustin from Tuguegarao City and the Christ the King Youth Symphony Orchestra from Calbayog City, Samar province.

The Calbayog orchestra was initiated by Cebu Archbishop Jose Palma when he served as bishop of Calbayog in Eastern Visayas several years back, said Fr. Mhar Vincent Balili, chairman  of the IEC liturgy committee.

One lector assigned to read in in the Mass, is blind.  He will read scripture texts through braille, a system of raised dots that can be read with the fingers.

In an earlier message about the 51st IEC, Pope Francis urged the faithful to fix their gaze on the mystery of the Eucharist so as “to draw from it a renewed apostolic and missionary zeal.”

The event carries the theme “Christ in you, our hope of glory,” a text taken from the letter of St. Paul to the Colossians.

The Pope said the theme sets in full light the bond between the Eucharist, mission and Christian hope.

“Today, there is a lack of hope in the world, that is why humanity needs to hear the message of our hope in Jesus Christ. The Church proclaims this message with renewed ardor, utilizing new methods and new expressions,” he said.

“It is a propitious occasion to rediscover the faith as a source of grace that brings joy and hope in personal, familiar and social life,” the pope added.

It will be a week of conference talks, workshop sessions and daily celebration of the Mass at the Eucharistic Pavilion in Mabolo, Cebu City and the Waterfront Hotel in Cebu.

Elsewhere in the city, there will musical performances, a choir festival and opportunities for delegates to appreciate the local flavor of Filipino faith.

On Wednesday, Jan. 27, delegates will got out to 14 parishes in the cities of Cebu and Mandaue for a “parish encounter,” where they will dialog with counterparts in the communities, celebrate Mass, share dinner and be treated to a cultural show.

On Thursday, after the sessions at the Pavilion, delegates are free to visit seven churches in Cebu City for the traditional Visita Iglesia to pay homage to the Blessed Sacrament.

On the same day, about 5,000 youths will gather at Hoops Dome in Lapu-Lapu for the IEC Youth Day, with activities for a vigil that will last until 4 a.m.

In the morning, they will hold a procession to Mandani Bay in Mandaue City.

On Friday, Jan. 29, Mass will be celebrated outside the Cebu Capitol. Thousands will join a procession through Osmeña Boulevard, a 3.5-kilometer solemn prayer walk, that will bring the Blessed Sacrament to Plaza Independencia.

On Saturday, Cardinal Vidal will preside over Mass at the Cebu City Sports Center where 5,000 children will have their first holy communion.

The week-long event will end on Jan. 31 with the statio orbis or the closing Mass on an open field in the South Road Properties, the site of the Nov. 12, 2012 thanksgiving Mass at the San Pedro Calungsod chapel.