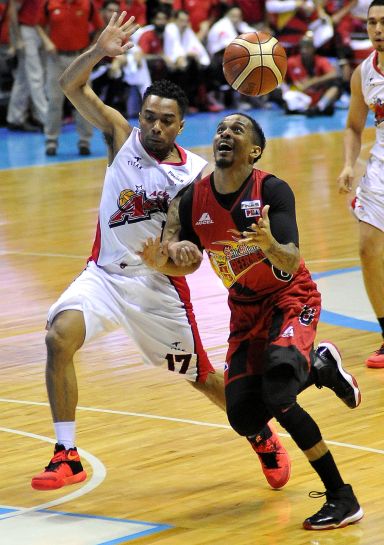 Cris Ross of SMB loses the ball on the way to the basket off Cris Exeminiano of Alaska , at the Smart Araneta. (INQUIRER PHOTO)

Riding the crest of two remarkable wins, the rejuvenated San Miguel Beermen look to inch closer to completing a feat that no team has ever done in the history of the Philippine Basketball Association (PBA).

The defending champions Beermen go for the equalizer when they battle the Alaska Aces in Game 6 of the 41st PBA Philippine Cup Best-of-Seven Finals tonight at the Araneta Coliseum.

The Beermen are still down in the series, 2-3, but momentum has clearly shifted to their side after winning Games 4 and 5.

The Beermen will come into tonight’s match with a high morale following the return of top center June Mar Fajardo, who missed the series’ first four games due to a knee injury.

In his surprise return in Game 5, Fajardo scored 13 points in 16 minutes to help the Beermen roll to an 86-73 overtime win.

No team has ever come back from a 0-3 deficit since the league implemented a best-of-seven series and San Miguel will try to change that.

“Everything is possible,” said San Miguel coach Leo Austria “It’s one-game-at-a-time for us.”

With the return of Fajardo, Arwind Santos also found his rhythm in Game 5, where he scattered 22 points, 16 rebounds and four blocks.

For the Aces to finally close out the series, Alaska head coach Alex Compton said the Aces have to find back their shooting touch that allowed them to post three straight wins.

“We lost twice in overtime. Credit to San Miguel Beer. They played well the last two games. They’ve been effective. I thought we got some good shots. Hopefully, next time we make some shots we didn’t make,” said Compton.

Compton lamented the 35 free throws that were given to the Beermen in Game 5, while the Aces only attempted five.

Alaska was whistled for 36 fouls in Game 5, while the Beermen were only slapped with 17.

The Beermen went 23-for-35 from the free throw area, while the Aces made three of their five attempts.