The way we were, a throwback to the 33rd IEC 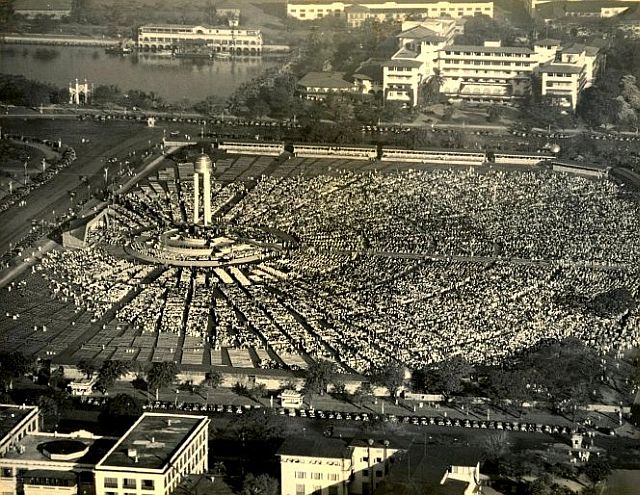 A photo of the 33rd International Eucharistic Congress held at the Luneta Park in 1937. (CBCPNEWS.COM)

The 51st IEC which reels off on Sunday in Cebu City is the Philippines’ second in 79 years.

Manila, then the national capital, hosted the 1st IEC for the Philippines but the 33rd IEC for the Catholic world. It was held from February 3 to 7, 1937.

Previous to the Manila IEC, the 32nd was held on October 1934 in Buenos Aires, Argentina where it was announced at the end of the Congress that the next IEC will be held in the Philippine capital.

How the PH Church handled the global Catholic Congress is described in the official souvenir book of the 33rd IEC.

Pope Pius XI known as the Pope of the Missions was then unable to attend the Congress. He sent Denis Cardinal Dougherty, then Archbishop of Philadelphia as papal legate.

The design of the official seal was conceptualized by Paulino Miranda Sampedro, Captain Borromeo, Reverend Louis L.R. Morrow and Rodolfo Garcia. It was approved by then Manila Archbishop Michael J. O’Doherty and the Executive Committee.

The official seal is bounded by an emblem similar to a coat of arms with the following elements:

In the middle: A cross with a monogram JHS on top of the chalice. Below the cross is the picture of a big church.

There are two elements on the left side – first, a galleon to symbolize the expedition led by a Portuguese explorer in the service of the Spanish crown which led to the discovery of the Philippines in 1521; the second element is the coat of arms of the reigning Pope, Pope Pius X1.

On the right side of the official seal is an image of the arrival of Christianity in the Philippines, with the cross in the middle surrounded by images of Spanish conquistadores and islanders.

The second element on the right side of the emblem is the official seal of the Philippine Commonwealth.

In 1937, an administrative body based on a US Federal Law known as the Tydings-McDuffie Act of 1934 governed the Philippines. It provided for Philippine self-government under a ten-year transition period before the country was to become fully independent. The 1935 Philippine Constitution written by Filipinos was in effect during this period.

The Philippine Commonwealth was headed by President Manuel L. Quezon was just into its third year. The vice president was a Cebuano named Sergio S. Osmena, Sr.

In 1937, the Philippine population stood at 14 million.

Based on 1935 statistics, there were only 1,400 priests in the Philippines.

The population of Manila, the capital city was estimated at 300,000. The Mayor of Manila was Juan Posadas.

Some 500,000 were expected to attend the Manila Eucharistic Congress.

Fifty-five (55) countries were represented in the Congress proper.

He returned to Philadelphia in 1915 after he was appointed Bishop of Buffalo, New York City.

Cardinal Dougherty was nominated Archbishop of Philadelphia in 1918. Three years later he was elevated to the Cardinalate. For the 1937 IEC in Manila he was named “Legate a Latere” by Pope Pius XI, that is, a papal legate of the highest class with powers to act in the name of the Pope on a particular mission.

In 1937, the Archbishop of Manila was the Most Rev. Michael O’Doherty.

The Archbishop of Cebu was Gabriel Reyes, who was appointed Honorary President of the Manila Eucharistic Congress.

In the Chapter titled, “The Seal of Selection,” the chroniclers of the 33rd International Eucharistic Congress suggested that the selection of Manila as venue may have been triggered by the Filipino faithful’s “ultimate enthusiasm” in the crowning of the Holy Virgin of Antipolo in the old Luneta in 1926.

The coronation of Mary in 1926 was highlighted by a fluvial procession with thousands of people who rode in cascos or rectangular barges. The processional at sea passed through the Pasig River into the breakwaters of Manila Bay where thousands more witnessed the crowning of the Holy Virgin under the local title, Nuestra Senora de la Paz y Buenviaje (Our Mother of Peace and Good Voyage).

It was attended by Filipinos and devotees from different parts of the world. News of the grand Marian event reportedly spread all over the Catholic world.

In 1929, the PH Church organized the National Eucharistic Congress, in which Catholics once again demonstrated their vibrant faith.

December 11 to 15, 1929 was marked by intense prayers, talks and reflections by priests, laymen and women all over the country. A souvenir book was also published to mark the first national Eucharistic Congress.

The 30th International Eucharistic Congress held in Carthage, Tunisia in Africa in May 1930 aroused the interest of PH Church leaders.

News about the event became topics of discussion and prompted Church leaders to research on the conduct of past Eucharistic Congresses.

In 1931 the Bishops of the Philippines met to discuss the possibility of hosting the IEC in Manila.

In September of the same year, then Archbishop of Manila Michael O’Doherty wrote to His Excellency, Count D’Yanville, the Secretary of the Permanent Committee on International Congresses based in Paris, France.

The Permanent Committee responded positively however, the favorable date could be in 1938. Although PH Church officials considered 1938 as still a long way off, they saw the seven-year window as enough preparation because people outside the country did not know that the Philippines existed.

The campaign to make known the Philippines as the venue for the next Eucharistic Congress fell on the shoulders of the members of Religious Orders and congregations including Filipino clergy who studied abroad.

The PH information drive was carried out by mail and personal contact.

The canonization of Bernadette Soubirous in Rome in December 1933 proved to be the clincher.

Then Manila Archbishop Michael O’Doherty went to Rome on a pilgrimage which coincided with a scheduled meeting of the Permanent Committee on International Eucharistic Congresses.

The 32nd IEC in 1934 was scheduled to be held in Rome but was finally held in Buenos Aires, Argentina.

Appearing before the Permanent Committee, Archbishop O’Doherty presented the Philippine Capital a worthy venue for the 33rd IEC because there is adequate public transportation by land, sea and air. He also took note that the former governor general of the Philippines was a Catholic, so with government leaders and majority of the population.

In 1934, the Permanent Committee looked prepared to announce that Manila was to be the venue of the 33rd IEC but it had to wait for the final approval of His Holiness Pope Pius XI.

The word in Paris is to make the IEC in Manila a Missionary Congress because the reigning Pope was known for his love for the missions.

To make sure the PH Church would be well represented when the Pope makes the announcement, a Philippine delegation traveled to Buenos Aires. They had also in mind to observe the preparations and conduct of the IEC.

Finally in October 1934 at the close of the 32nd IEC in Buenos Aires, Argentina, Pope Pius XI announced the 33rd IEC will be held in Manila. The announcement was made through Cardinal Eugenio Pacelli, serving as Papal Legate.

An executive committee was immediately organized after the announcement. The committee on ways and means and the publicity committee were mentioned in the book as having been given “special notice” for its importance.

The period of preparation for the 33rd IEC officially started in January 1935. It was a great challenge because there was a shortage of priests.

The robust Philippine population of 14 million proved to be an essential resource for the Church.

Zealous lay leaders and workers helped conduct so-called petite congresses oin different parts of the country to prepare the faithful for the IEC.

A guild for adult catechism knows as Bellarmine Guild visited and extended catechesis to 160 towns in Luzon.

The group is usually composed of 7 young male and female professionals, who were highly esteemed by the parish priests and the rural folk who responded to the mini-IECs in far-flung towns.

The outreach work resulted in an experiment of bringing religious instruction to public schools, which greatly interested Archbishop O’Doherty.

The call to action generated favorable response among young Catholics who volunteered to teach catecheses in public schools. The number of children who benefited from this program as an offshoot of preparations for the 33rd IEC is said to be half a million.

A total of 1,196 petite congresses held in different parishes had been recorded. The number is not exact because in some instances 2 or 3 parishes would join forces to conduct one mini-congress.

The petite Congresses generated a renewed awareness of their Catholic upbringing among the faithful. Many returned to the teachings of the Church. There was a spike in the number baptisms, people who went to confession and took Holy Communion.

For the PH Church, the period leading to the 33rd IEC is described in the book as the re-evangelization of the Philippines.

The physical preparation for the 33rd IEC was no less remarkable.

The great task of accommodating half-a million delegates meant provisions for lodging, food, medical supplies, water, fuel and sanitation including the building of a monumental altar, a sacristy, thousands of benches, comfort stations, lights and sound equipment required of a great event, fell on the shoulders of the bishops of the Philippines headed by the Archbishop of Manila, Michael O’Doherty.

The organizational work and logistical preparations were channeled to an Executive Committee headed by the former Auxiliary Bishop of Manila who later served as Apostolic Prefect of Mindoro, William Finnemann.

(The author would like to thank Jobers Bersales Reynes, USC Press Manager and CDN columnist for lending the 33rd IEC official souvenir book as resource for this article.)