Back from knee injury, Fajardo vows to go all-out in Game 7 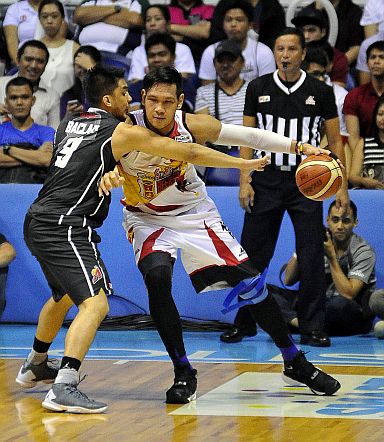 June Mar Fajardo (right) will be the main weapon of the San Miguel Beermen when they battle the Alaska Aces in Game 7 of the 41st PBA Philippine Cup Finals on Wednesday at the Mall of Asia Arena. (INQUIRER PHOTO)

The San Miguel Beer center went down with a left knee injury that cost him  four games in the finals. Fajardo’s apprehension grew as his team kept on  losing to the Alaska Aces until the Beermen stared at a 0-3 hole.

Facing elimination, the timing was just right for Fajardo to show up and be with his teammates on the bench in Game 4 after he received his

Best Player of the Conference award.

In that game, the Beermen weathered an imminent Alaska coronation in overtime, 110-104.

And that was just the beginning as San Miguel survived another overtime scare three days later, 86-73, with Fajardo playing limited minutes in a surprise return.

With the condition of his knee vastly improved, Fajardo showed flashes of his old form to help the Beermen force a deciding game for the 2016 Philippine Cup title.

San Miguel already made history by becoming the first team in the league to forge a Game 7 after trailing, 0-3, in a best-of-seven series, but Fajardo and the Beermen will only be content when they win the championship.

Read Next
Working it