Comelec Chairman Andres Bautista stopped at the gate of UP Cebu 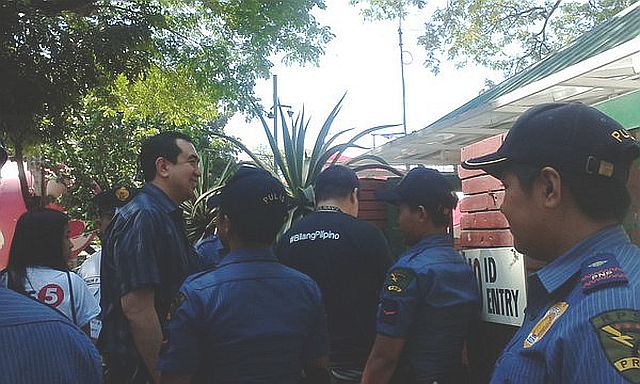 Comelec Chair Andres Bautista had to walk from the gate of UP Cebu after his car was stopped by security personnel for lack of a car pass. (CDN PHOTO/MICHELLE JOY L. PADAYHAG)

The security at the University of the Philippines (UP) Cebu campus in Barangay Lahug, Cebu City that will host the Visayas leg of the presidential debates was so tight that even Commission on Elections (Comelec) Chairman Andres Bautista was not allowed to get in initially because he has no identification card and a car pass.

But Bautista did not lose his cool and instead commended the guards for doing their jobs.

Bautista arrived in UP Cebu, the venue for this afternoon’s second PiliPinas Presidential Debate 2016, at 10 a.m. on board an unmarked black van but was stopped at the gate by uniformed guards and security personnel in plainclothes.

It took about five minutes before Bautista’s identity was verified and established.

The Comelec chairman then opted to walk about 200 meters from the gate to the media center where he received his identification card, which will enable him to enter the debate venue, the UP Cebu Performing Arts Hall.

Bautista, who proceeded to hold a press conference, said he was impressed with the security at UP Cebu and was looking forward to the debate.

“I’m excited sa debate, mahaba siya (its going to be long). The candidates will have more time to speak,” he said.