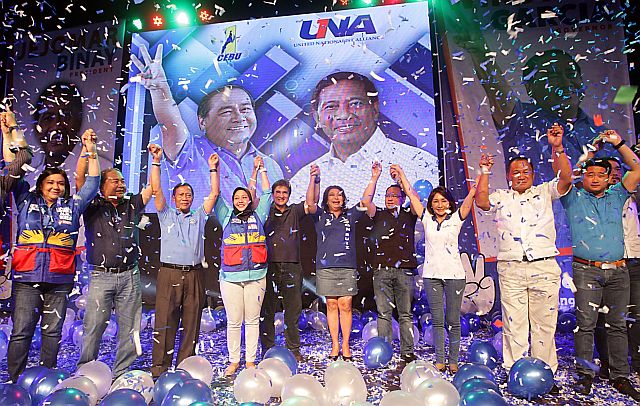 HAPPIER TIMES. United Nationalist Alliance standard-bearer Vice President Jejomar Binay and his entire slate were endorsed by One Cebu party led by gubernatorial candidate Winston Garcia in this photo taken on Feb. 16, 2016. Among those in the photo is third district Rep. Gwen Garcia who, despite the split, remains a member of UNA. (CDN FILE PHOTO)

Before the members of One Cebu can take a breather from their breakup with United Nationalist Alliance (UNA) and decide if they will go for either Davao City Mayor Rodrigo Duterte or Sen. Grace Poe, the local party is being wooed back by UNA’s presidential aspirant, Vice President Jejomar Binay.

In a press statement, UNA said it believed One Cebu’s gubernatorial candidate, Winston Garcia, remained to be the “best candidate to lead Cebu” and would continue to give him its “unconditional support.”

“Despite the political misunderstanding, the people of Cebu deserve the best, and UNA believes Winston Garcia is the candidate who will uplift the lives of the poor,”  said UNA president and Navotas Rep. Toby Tiangco.

Binay, in the same statement, was also quoted as saying that he remained “optimistic” his party would reconcile its differences with One Cebu.

Garcia, in a text message to Cebu Daily News last night, thanked Binay for the endorsement but stressed their decision to break ties with UNA has not changed.

“As I said, we maintain good relations with him (Binay) as what happened was a discontinuation of party alliance, not of personal relationships,” he added.

Garcia also stressed they have yet to decide who would they support for president, adding they will not decide on anything without the consensus of all its leaders, including his sister, Cebu third district Rep. Gwendolyn Garcia, who opted to remain a member of UNA.

“It’s still 50-50 at this point,” he told CDN in a phone interview, referring to the likelihood of the party choosing between Duterte or Poe or going for a “free zone.”

But a key supporter of  Duterte in Cebu said they would not want their candidate to be identified with any political group in Cebu.

Cordova Mayor Adelino Sitoy, a member of Duterte’s PDP-Laban, told CDN that One Cebu has been sending “feelers” to the Duterte camp, but the latter’s supporters in Cebu would rather that the mayor campaigns without a local slate to make sure that he gets  support “from (all) sides.”

Sitoy, who hosted a dinner for Duterte on Monday night, said she told Duterte to stay “as is,” or refrain from backing a gubernatorial bet in Cebu because he actually has supporters on both sides.

Sitoy said that with Duterte’s growing popularity in Cebu, he does not even need to align himself with any local candidate.

Sitoy, while supporting the Liberal Party (LP) candidates in the province, is one of the few mayors in Cebu who openly supports Duterte’s candidacy.

Sitoy said he personally sought the permission of LP gubernatorial candidate Gov. Hilario “Junjun” Davide III before he made public his support for Duterte.

Sitoy hosted a late night dinner for Duterte and his staff at the Cordova Home Village Resort in Barangay Datag on Monday. Duterte arrived at the resort about 11 p.m. from his Lapu-Lapu sortie and stayed at the resort for about three hours.

During their conversation, Sitoy said Duterte made mentioned of the “feelers” he has been getting from One Cebu, but the Davao City mayor did not elaborate. It was after Duterte sought his advise that he told him to stay away from aligning with a local party, Sitoy said.

One Cebu secretary general Pablo John Garcia, however, stressed there was no formal talks between One Cebu and Duterte.

He said he was also not privy to any attempt from UNA to reconcile with One Cebu.

He likewise clarified that the photo that reached CDN showing him and his sister Gwen sharing dinner with Duterte was taken last Jan. 7,  long before One Cebu announced its alliance with Binay on Feb. 16.

Pablo John admitted discussing politics with Duterte, but he didn’t see anything wrong with it because One Cebu was not yet then committed to any national party.

“Yes, we discussed politics, but there were no commitments made and no formal talks that time. We just had common friends,” he said.

He said he, Gwen and Duterte were invited to a pre-Sinulog dinner at the house of “mutual friends.” Also present during the gathering were Duterte’s running mate, Sen. Alan Peter Cayetano, and campaign strategist, Lito Banayo.

Some incumbent One Cebu mayors, meanwhile, expressed inclination to support Duterte; among them are Mayors Allan Adlawan of Asturias and Ricardo Ramirez of Medellin; while others  would want to support Poe instead.

One Cebu reportedly consulted its mayors over the weekend before it made the announcement about breaking ties with UNA last Monday.

With the local campaign period about to start on March 26, Winston said there is a possibility that One Cebu would adopt a “free zone” scheme insofar as the presidential and vice presidential choices  are concerned.

“We can stand on our own even without a national party. We are not insecure (that we need) to support a (national) candidate,” he added.

Gwen, meanwhile, remained mum on what would happen if One Cebu decides to support another candidate, saying that she’d rather not answer speculative questions.

“It really doesn’t achieve anything. It doesn’t answer the situation because there is no situation yet,” she told CDN over the phone.

The congresswoman said she will be ready to answer “once the situation presents itself.”