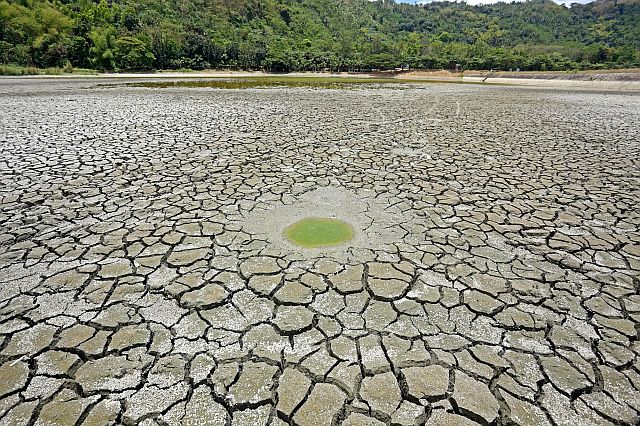 JACLUPAN Dam in Talisay City has dried up. There is no clearer evidence than these cracks on its tracts of land that used to be filled with water. (CDN PHOTO/LITO TECSON)

Water is getting extremely scarce in many parts of Cebu City and province, with at least 44 areas in the cities of Cebu, Lapu-Lapu and Talisay and the town of Liloan, are now faced with little or no water supply from 6 a.m. to 9 p.m. every day in the next two months, or at least until the rain comes in June.

Even if Cebu is officially not in the state weather bureau’s list of areas affected by the El Niño weather phenomenon, the island is reeling from the effect of the absence of adequate rainfall, which now prompted Cebu Gov. Hilario Davide III to consider placing the province under the state of calamity.

The extended dry spell has also compelled certain sectors to request the Archdiocese of Cebu to release an Oratio Imperata, a set of Roman Catholic invocative prayers consisting of a liturgical action and a short, general prayer that the faithful can pray during or when there is an impending calamity.

Cebu Archbishop Jose Palma yesterday told Cebu Daily News that he recognized the importance of invoking the Oratio Imperata and assured he would heed the request.

Palma also stressed the need for Filipinos to take initiatives to mitigate the effects of global warming and be aware of how abuse of nature and environment could have devastating results.

The lack of adequate rainfall experienced in Cebu over many months since last year was compounded by the start of the dry season in the country, which was announced on March 18 by the Philippine Atmospheric Geophysical and Astronomical Services Administration (Pagasa).

Pagasa said that since mid-March, the day-to-day weather has gradually become warmer and drier and would continue to do so in the coming weeks, while humid conditions are expected by May.

The Pagasa’s latest El Niño bulletin showed Cebu is not in the list of areas affected by either drought (3 consecutive months of way below normal rainfall) or a dry spell (two consecutive months of way below normal rainfall). As of end of March in the Visayas, only Bohol was listed to be affected by the dry spell while Negros Oriental and Siquijor are projected to suffer from drought.

Alfredo Quiblat, chief of Pagasa-Mactan, explained that while Cebu is not listed in the El Nino-affected areas, its water sources are drying because its rainfall was below normal.

In January, Pagasa recorded 116.4 millimeters of rain in Cebu, which is considered to be near normal since the average normal rainfall is 126.4 mm.

For February, 90.6 mm or an above normal rainfall was recorded out of 77.8 mm as the average.

However, Quiblat said that even if the rainfall in January and February were at near or above normal ranges, it was not enough for Cebu to recover from the lack of rainfall it experienced last year.

This was, again, compounded when in March, Cebu only recorded 4.3 mm of rain, a tremendous drop from its usual average rainfall of 61 mm for the month. For April, the average amount of rainfall is 50 mm but as of April 7, Pagasa recorded zero rainfall, he said.

Quiblat said that if there would be two consecutive months with way below normal rainfall, Cebu could be included in Pagasa’s dry spell lookout.

He said the El Niño phenomenon that started in May 2015 is expected to end in May this year. For May, average amount of rainfall in Cebu is 100.6 mm.

Consumers in interior and elevated areas in the three cities and one town in Cebu would need to brace for lack of water over a daily 15-hour period, she said, as the water district’s two surface water facilities have dried up.

During a visit at the Jaclupan Dam facility in Talisay City yesterday, the dam that used to produce 33,000 cubic meters of water a day is down to about 20,000 cu.m. per day. A large area that used to be filled with water now has exposed cracked soil, with tall green grasses everywhere. A dead tilapia fish was seen inside the parched land.

Kara said that another major water source of MCWD, the Buhisan Dam in Barangay Buhisan in Cebu City, has had zero production since March. Buhisan used to produce 7,000 cu.m. of water a day, she said.

The other water sources are the 120 ground wells operated by MCWD and from its 54 bulk water supplies. There are 117,000 connections that comprise of households and commercials.

Most of the establishments that have large volume use of water are those manufacturing sites, beverages company and hotels, according to Kara.

“The danger here is if there’s no rainy season, then there might be water rationing and there are only certain hours per day when consumers can use and store water,” Kara told CDN.

According to Kara, the water district has used up all its reserve water due to the increase in demand resulting from the onset of the summer season.

Kara said consumers are strongly advised to “conserve, store and use water wisely.”

She also advised those who are living at dormitories, boarding houses and with laundry services to have their own water tanks.

Davide, meanwhile, said he would consult with Baltazar Tribunalo, head of the Provincial Disaster Risk Reduction and Management Office (PDRRMO), before he would decide if he would need to place the province under the state of calamity.

Tribunalo, in a separate interview, said the initial report of the towns and cities that they were experiencing dry land and drop in water levels would be verified next week by a provincial rapid assessment team.

He said they would need specific figures as to the extent of the damage so they could apply the needed intervention, he told reporters after the emergency meeting between Davide and the department heads at noon yesterday.

After yesterday’s presentation of the different departments on their efforts in curbing the effects of the dry spell, cluster groups were formed to check on the water system, livestock, livelihood, health and other needs of the affected residents. The teams will be composed of personnel from the PDRRMO and the provincial health, veterinary, agriculture and engineering offices.

Provincial Agriculturist Roldan Saragena said the whole province has been hit by the dry spell but they have no specific figure yet on the number of affected farmers.

Davide said a declaration of a state of calamity could be an option if only to ensure that funds could be immediately disbursed to residents still in need of relief.

So far, the provincial government has given food assistance to affected residents in 960 barangays in the province as part of its yearlong El Niño Emergency Response and Preparedness Plan, said Marivic Garces, head of the the Provincial Social Welfare and Development Office (PSWDO).

“We started June 21 last year with Barili and the last that we distributed is the island municipalities of Poro and Tudela which was done last March 21,” said Garces.

She said the province distributed nearly 26,000 sacks of rice to more than 300,000 families, with each recipient family receiving 3 kilos of rice as well as half dozen of canned goods and noodles.