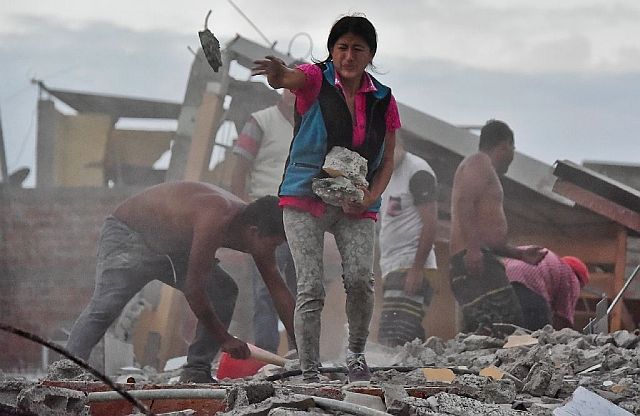 A woman in Ecuador removes rocks as she searches for her missing husband, who is believed to be buried under the rubble. (AFP)

PORTOVIEJO, Ecuador — President Rafael Correa said the death toll from the 7.8-magnitude earthquake has risen to at least 272.

He gave the new count early Monday after visiting affected areas and said it would “surely rise, and in a considerable way.”

Correa said Ecuador will overcome the tragedy. He said “the Ecuadorean spirit knows how to move forward, and will know how to overcome these very difficult moments.”

Spain has sent a military plane with 47 search-and-rescue experts and five dogs to Ecuador to help authorities look for survivors.

The jet left a military base airport outside Madrid on Monday morning and was expected to arrive in the hard-hit city of Guayaquil in the afternoon.

Correa said earlier that rescue teams were also coming in from Mexico and Colombia.

He said the quake was the worst natural disaster to befall the Andean nation since the 1949 earthquake in Ambato that killed thousands.

Authorities said at least 42 people died and more than 1,000 were injured in the quakes on Thursday and early Saturday.

Nine people died in the first quake, with a magnitude of 6.4, and 33 in the second quake, which registered 7.1, revised from an initial reading of 7.3.

The flights by two MV-22 Ospreys were a gesture of cooperation between the two allies and a chance for the US military to demonstrate the utility of the tilt-rotor aircraft, whose deployment has raised controversy in Japan due to safety concerns.

Read Next
Australian Embassy: Rape should never be joked about