THE TIME IS NOW 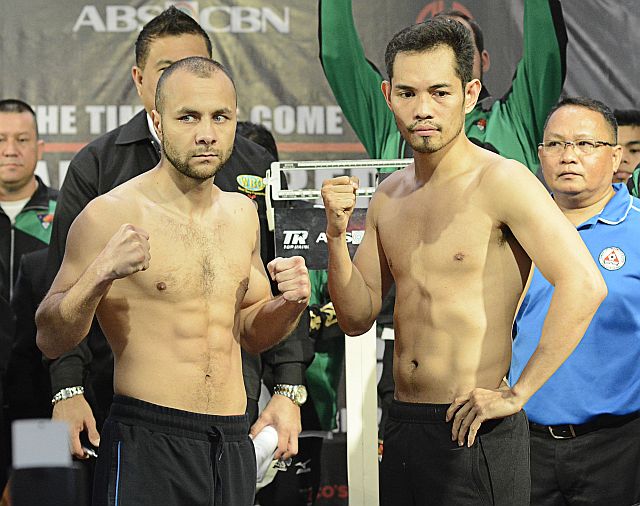 ALA Promotions International CEO Michael Aldeguer assured boxing fans that the Nonito Donaire Jr-Zsolt Bedak fight tonight will push through even with the almost impossible chance of a downpour.

Donaire (36-3, 23KOs) defends his WBO super bantamweight crown against Hungarian challenger Zsolt Bedak in the mainer of “The Time Has Come” card at the Cebu City Sports Center (CCSC).

The open venue can accommodate 25,000 to 30,000 fans and despite the ongoing dry spell, there’s a 50 percent chance of rain tonight according to Accuweather.com.

But Aldeguer said, there’s no need to worry since the entire boxing ring is covered with a roof and the whole field is carpeted.

Fight fans though are advised to bring umbrellas or wear hooded shirts just in case.

“The ring has a roof so there’s no need to worry and there’s little chance of raining,” Aldeguer told CDN.

The last time the CCSC hosted a boxing event in was in 2007 when 25,000 boxing fans watched Z Gorres fight Fernando Montiel for 12 rounds. The Mexican won via split decision.

Aldeguer is expecting a more explosive atmosphere tonight considering that Donaire Jr. is a five-division world champion who will fight in Cebu for the first time.

“Hopefully the entire CCSC will be filled up and we are very glad that the tickets are selling quite fast,” said Aldeguer. “There’s pressure on my side because we are partnering with Top Rank Promotions. They will surely be watching us and if this fight succeeds, then there will be more fights like this in the future,” the young promoter added.

Aldeguer said that if tonight’s event will be successful, Top Rank and ALA Promotions Int’l will partner again in a major fight card to be held in Dubai which will feature Donaire anew.

The activity center of Ayala Center Cebu was packed to the rims yesterday when a fired up Donaire and a subdued Bedak (25-1,8KOs) took to the weighing scales.
Donaire Jr. weighed 121.75 lbs while Bedak came in at 121.5 lbs.

In the co-main event, Australian Paul “Showtime” Fleming (21-0,14KOs) and his Mexican opponent Miguel Angel “Ranita” Gonzales (22-7-1, 12KOs) weighed in at 129lbs and 130lbs respectively for their 10-round battle for the WBC continental Americas super featherweight belt.

There will be five other bouts in the undercard with the curtain raiser set at 5 p.m.