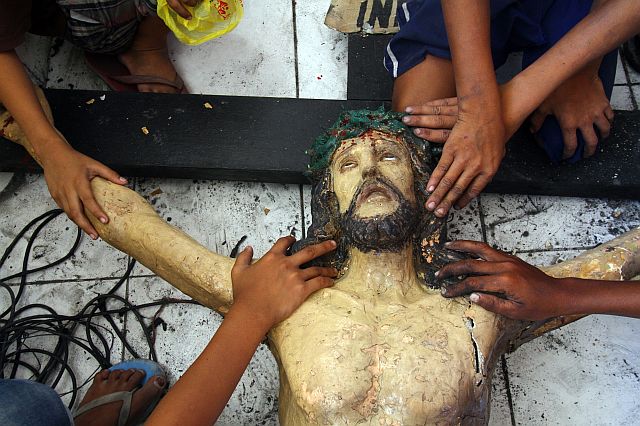 The huge crucifix hanging near the altar fell to the floor as the roof of the San Vicente Ferrer Chapel caved in during Tuesday’s fire that gutted the building in Pitalo, San Fernando town. (CDN PHOTO/TONEE DESPOJO)

ENGINEERS are now evaluating what remains of the chapel of San Vicente Ferrer in Pitalo, San Fernando to determine if there is a need to rebuild the chapel or just renovate it.

They visited the heritage chapel which was destroyed by fire last Tuesday afternoon.

Meanwhile, residents of Pitalo worked hand in hand to clear the site of debris and keep whatever could be recycled.

“Naguol gyud mi pag-ayo. Sakit kaayo alang namo ang nahitabo kay kabilin gud ni ang chapel sa among mga katigulangan ug nahimo na pud kini nga kabahin sa among kinabuhi,” said 46-year-old Angelita Papas, the chapel’s custodian for 12 years.
(We are deeply saddened. What happened was very painful to us because the chapel has been the legacy of our forefathers and it has become a part of our lives).

The chapel, made of cement, was built in 1925 by Antonio Delgado, a devotee of San Vicente Ferrer.

Papas said Delgado, whose wife is a native of Barangay Pitalo, San Fernando, used to travel to Toledo City in the western part of Cebu  to pay homage to San Vicente Ferrer.

Later in his life, Delgado decided to build a chapel in Pitalo to propagate the devotion to the saint in their place.

People who visit the place claim their prayers were answered by praying to the saint, lighting candles, and attending Masses.

“People were healed of their illnesses, some find jobs, passed licensure examinations, and obtained good health,” Papas said in Cebuano.

Since a lot of people visit the place, the chapel received numerous donation.

In 1998, Papas said residents of Pitalo staged a “people power” calling for the ouster of the chapel’s president who refused to step down even if he allegedly didn’t handle the operations well for 10 years.

The brother of the person whom the people wanted to become president was gunned down.

The incumbent president at the time left Pitalo, and a new president was elected to manage the chapel for 15 years.

In 2013, the people approached Cebu Archbishop Jose Palma who decided to let priests from the mother church of San Isidro Parish in San Fernando supervise the San Vicente Ferrer chapel.

The priests led by Fr. Nazario Vocales came up with an order that the term of all chapel officers shall be five years only.

The chapel and the land where it stands are owned by Delgado, under the name of San Vicente Ferrer Chapel.

Since January 2016, Papas said they received about P1 million in donations from people who visit the place.

The fire that gutted the chapel was caused by hundreds of lighted candles, whose flames lapped up the wooden structure at the back of the altar, housing a statue of San Vicente Ferrer.

A couple reportedly lit 4,900 candles for an answered prayer inside the 91-year-old chapel.

“I tried to stop them but the woman told me, ‘Don’t mind us. We have to light all these candles.’ What else can I do?” said 67-year-old Borgonio Sabal in Cebuano.

Sabal is a massage therapist at the chapel who cautioned the couple not to light the candles all at once.

At least 16 houses located near the chapel were also burned. No one was hurt.

Chapel workers were able to save all 16 images and sacred vessels inside the structure.

The roadside chapel has been visited by a number of people who seek divine aid through the intercession of San Vicente Ferrer.

Papas believes the wooden image of San Vicente Ferrer which was enthroned in the altar’s retablo is miraculous.

When she was young, she said she had a heart enlargement and amoebic dysentery, a type of blood diarrhea.

Papas was bedridden for about a year. But she did her best to visit the chapel and pray for healing.

She was eventually healed.

“Tuo-tuo lagi na pero ako lang gyud gihimo kay masakiton man ko,” she said.
(I know it’s superstitious belief. But I did it because I was desperate to get healed.)