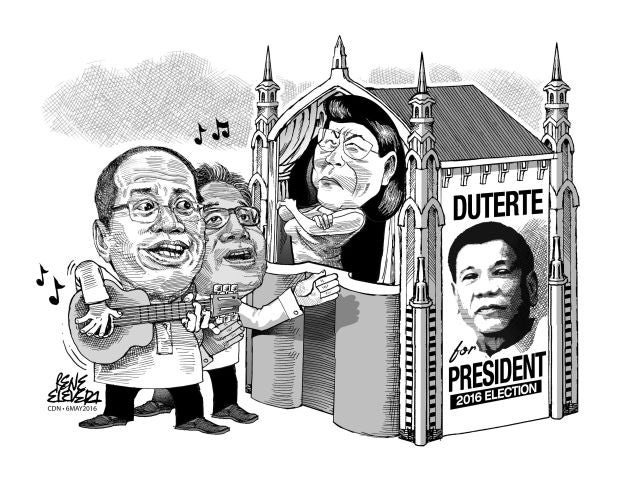 The religious bloc, which was visited by President Benigno Aquino III last Monday, has yet to officially declare their chosen candidates as of this writing, though how they would impact the outcome of the elections remains to be seen.

The timing of the President’s visit to the INC is suspect though not unexpected since it occurred just as vice presidential candidate and Sen. Antonio Trillanes IV and Duterte’s lawyer met at a BPI branch concerning the disclosure of the mayor’s bank account there.

If the INC endorsement is official, it would merely add fuel to Duterte’s campaign juggernaut which sees the mayor commanding a double digit lead in Luzon and Visayas surveys and securing the support of more than half of Mindanao voters.

But the perception of a ground swell of support for Duterte’s candidacy may not reflect the reality on the ground, as Vice President Binay is fond of saying based on his past 2010 experience in which he came from behind to snatch the vice presidency from then survey leader Roxas.

Which brings us back to the INC bloc. As everyone who’s followed the news knows by now, the religious group had received quite the battering from disgruntled former members who exposed alleged irregularities within its ranks.

Despite President Aquino acquiescing to INC pressure to ease off on the probe, it appears the INC isn’t so eager to return the favor even with the President’s personal visit.

Still, the recent fallout within the INC ranks casts doubts on whether they can summon the same united bloc vote that they held easily in past elections. That doesn’t in any way diminish their value as a potent political force, but they don’t appear as formidable anymore.

Regardless of who they endorse, it is up to each Filipino to vote based on his or her preference and conscience. Surveys and bloc votes shouldn’t influence his or her decision on whom he or she considers to be the most qualified and trustworthy to lead this country.

Read Next
I am for continuity