Behind every success is a great mother 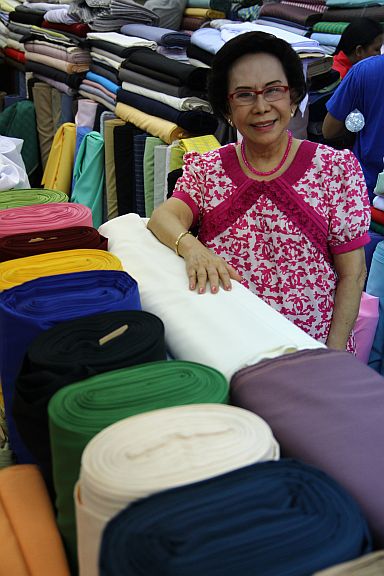 This is especially true of the successful Cokaliong siblings who give a great deal of credit to their mother for fully supporting them throughout the years.

The Cokaliong family has firmly made its mark in the textile, shipping and of late, the hotel industry in the Visayas and Mindanao with Chester Enterprises, Inc., Cokaliong Shipping Lines Inc., Curtains and Trims, and Bayfront Hotel Cebu.

Gregoria Cokaliong, the family’s beloved matriarch who turns 80 on Monday, May 9, would be the first to say that she is a strict mother to her four children: Chester, Christopher, Cherrylene, and Charlton. But she always has her children’s best interests at heart, she adds.

“I taught them the way my father taught me,” Gregoria explains.

Gregoria is the third of eight children and the eldest daughter of Paulino Cue and Julita Lee, owners of Sen Hiap Hing Department Store, considered Cebu’s SM in the 1950s.

As soon as school ended for the day, she and her siblings worked at their store and homework would have to wait until the store closes, she recounts.
When Gregoria and her husband, the late Edgar Dy Cokaliong, founded Chester Enterprises, they expected their children to work at their store as well.

Sometimes, her kids had to skip school on very busy days. She remembers her youngest, Charlton, delivering textile orders to the provinces when he was only about 10 or 11 years old.

“She’s very industrious and hardworking. She takes good care of us. She guides us and she’s very supportive of our projects.”

Gregoria was born in 1936 in Manalili Street, Cebu City. With the Second World War just around the corner, her childhood was a bit chaotic, she says, as her family moved from one place to another in their constant flight from Japanese invaders.

Gregoria remembers spending time in Cordova and Bohol. She recalls climbing up a church tower to see Japanese fighter planes explode in the air.

She was 10 when she was finally able to go to school. She finished high school by the age of 16 after being accelerated in her class.

Because she was expected to work in the family store anyway, Gregoria said that she did not bother to dream of something else. Knowing that she would end up working for Sen Hiap Hing, she decided on what she felt was the “easiest course” to take in college, BS Mathematics in UP Diliman.

Gregoria’s love for math is shared by most of her children and grandchildren who have inherited her father’s math aptitude.

Gregoria’s father, Paulino, did not know how to read and write but when it came to numbers, he was able to arrive at the right answers quickly, she says.

While she is proud that her family inherited her father’s natural ability in math, Gregoria is equally in awe of her family members who show a creative streak.

The Cokaliong name may be very well-known but the family’s success was not a low-hanging fruit that was easily plucked but the fruit of several years of labor and toil.

The family is what it is today because of a collective effort that included 16-hour workdays for members of the family, many sleepless nights and a lot of sacrifice from everyone.

Gregoria, who had always been an obedient child, married Edgar Cokaliong, a poor man with big dreams, against her parents’ wishes.

Despite the challenges, Gregoria stood by Edgar and supported him when he decided to venture into the textile business.

Little did she know that her college course and subsequent 13-year stint as a Math teacher at the University of San Carlos would be the catalyst that would forever change their fate.

Because they were virtually unknown then, Gregoria says vendors would often refuse to accept her husband’s post-dated checks. Until one time, a student’s father happened to be one of these vendors.

Upon seeing her being turned away, her student vouched for her. This set off a chain reaction which allowed them to gain the trust of other vendors.

When her eldest son, Chester, expressed interest in venturing into the shipping business, the family needed a lot of capital. Gregoria approached a

bank to take out a loan. The bank officers turned out to be her former students and they all endorsed her loan for approval.

“I was able to help them learn Math and in return, they were also able to help me,” she recalls with a fond smile.

From the way she looks, moves and talks, nobody would guess her age to be 80.

Gregoria credits this to a lifestyle change when she was in her 50s after she realized, while on a trip to Europe, that people older than her were more energetic.

According to Gregoria, this made her very angry. She did not want to be slower than older people!

Switching to a diet of fruits and fish coupled with daily one-hour treadmill exercise she proudly points out that she can now even keep up with her young grandchildren.

“Dili gyud ko magpapildi (I refuse to be defeated),” she laughs.

The family celebrated Gregoria’s 80th birthday with a thanksgiving dinner at the Grand Convention Center last night. Gregoria says that she is most happy during her birthdays because she can see her children painstakingly planning for a perfect event to surprise her.

“I am very happy. I’m so contented with what I have,” she says.

With a life so full, that comes as no surprise.