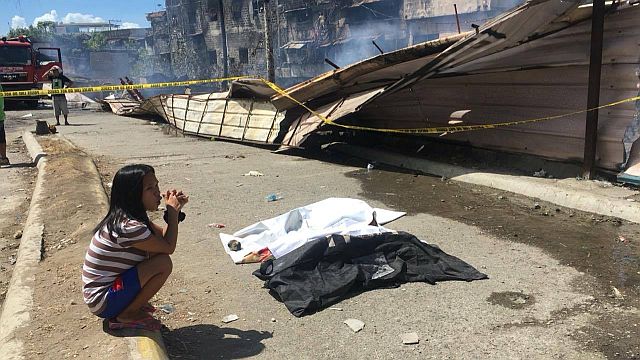 A young relative watches over the blanket-draped remains of the children who perished in the fire. (CDN PHOTO/Izobelle T. Pulgo)

It was a tragic turn of events on the eve Mother’s Day when a young mother and her three children died along with three others in a nearly two-hour dawn fire that razed about 80 houses in two sitios in Barangay Pahina Central Cebu City yesterday.

Ricardo Alvarez Jr., 27, was in shock. Immeasurable grief was written all over his face.

It took him a while to accept that his common-law wife and three young children were among the seven persons who perished in fire that also displaced over a thousand others.

At first, Alvarez refused to believe that his partner Cindy Galvan, 22, and their children — Rickcin, 4; Star, 2; and three-week-old baby Rain Cinrick — were dead even after the Cebu City Fire Department confirmed they were among the fatalities.

But later, after firefighters recovered the bodies of all the fatalities close to 9 a.m. yesterday, Alvarez immediately identified those of his family.

He remained in a daze and only broke down when his father, Ricardo Sr., arrived at the scene to comfort him. The burned remains of Galvan and her children were found by firefighters huddled together near what used to be the stairs of the two-story house owned by another victim, Maximo Villafuerte. The Alvarez-Galvan couple and their children were renting a room at the second floor of the house.

Galvan was holding baby Rain to her chest while the other two children were at her side.

At least 1,000 individuals were rendered homeless by the fire that hit Sitios Tumoy and Riverside of the barangay, said Cebu City Department of Social Welfare and Services (DSWS) head Dr. Ester Concha.

Fire investigator SFO2 Noel Opolentisima said the fire started from the house of Villafuerte, and was believed to have been caused by a lighted kerosene lamp, since the house has no power connection.

Alvarez, a housekeeper of a pension house just meters away from the Villafuerte house, rushed home when he saw his neighborhood burning. But the fire had completely engulfed Villafuerte’s house and had spread to other houses by the time he got there.

When the fire broke out, Galvan and her three children appeared to have ran to the stairs but could not go down because the ground floor was consumed by flames. The young mother and her children stayed near the stairs where they were later found by firefighters.

Villafuerte, Abarquez and Jannah were, on the other hand, identified by the girl’s mother, Mariz Belarmino.

Belarmino, distraught at her little girl’s untimely death, started weeping when she talked about how she had to leave her daughter in the care of her father and stepmother because the couple had grown fond of Jannah.

Belarmino, who now lives in Duljo-Fatima, confirmed their house had no electricity but belied reports that the fire was caused by a lamp left unattended in her father’s house. 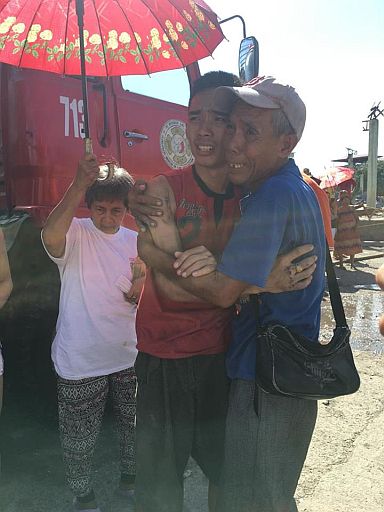 GRIEVING FATHER. Ricardo Alvarez Jr. is held tightly by his father, Ricardo Sr., in an effort to comfort a son who lost his common-law wife Cindy Galvan, 22, and their three young children to the fire that razed 80 houses in Barangay Pahina Central, Cebu City. (CDN PHOTO / IZOBELLE PULGO)

The fire victims were to be evacuated to the Pahina Central barangay gymnasium, but since the center could not accommodate all the victims, Concha said they coordinated with Sawang Calero barangay officials for the use of their barangay gym.

Concha said the number of victims may increase since many still have to be listed as there were victims that could no longer be accommodated at the Pahina Central gym.

She said the nearby Regino Mercado Elementary and Night High School could not be used for the fire victims since it would be used as voting precincts for this Monday’s national and local elections. The building is under heavy security because of the vote-counting machines stored there.

The scene of the fire was only about 200-300 meters from the Cebu City Fire Department but firefighters mistakenly thought that the fire broke out at the Taboan Public Market, which is adjacent to the abandoned One Citilink Terminal, at the vicinity of which where the fire actually broke out.

According to Opolentisima, a caller reported around 4:44 a.m. that a fire had broken out in Taboan. Fire trucks were immediately dispatched to the site only to speed away to another part of the block where the fire was. The blaze by then was already spreading fast.

He said the fire destroyed almost the entire area immediately beside the old One Citilink Terminal and had also gutted six stalls in Taboan Public Market. The fire investigator said they had difficulty in accessing the site and issues over water supply hampered their operations. “(Lisud ang) access and tubig kay kabawo na ka sa panahon karon, menos jud ang water supply,” he said. “Lisud kay layo man ta ug refillan.”(Reaching the site was difficult and because of the dry spell there was very little water supply at the time. We had to go far to refill our fire trucks.)

Cebu City Vice Mayor Edgardo Labella, who arrived at the scene at around 8:15 a.m. also expressed concern over the persistent problem of accessing densely populated areas each time there was a need to respond to fire emergencies. Barangay Pahina Central Councilor Jeffrey Base also believed more exit routes should be built before the fire victims are allowed to rebuild their homes.

He noted that the two affected sitios (sub villages) had only one exit leading to the highway which was very narrow and about 30 meters long.

Base said they would ask the new owner of the One Citilink property to provide a road right of way to the residents of the area, who had been sandwiched between a small river and the Citilink’s fence made of G.I. roofing material.