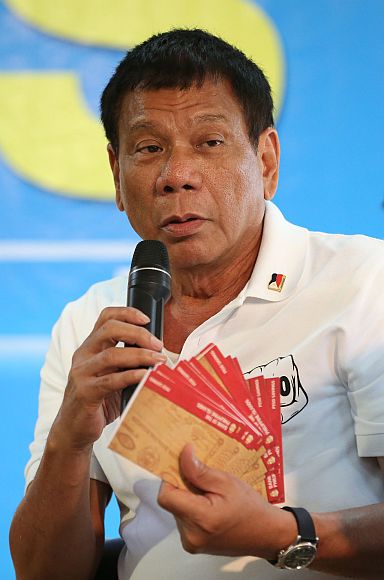 The 71-year-old stormed to victory with a landslide in Monday’s election after an incendiary campaign dominated by his profanity-laced vows to kill criminals.

Philippine shares had fallen more than five percent over the past six weeks as Duterte looked set for victory, with traders concerned about his economic plans.

Despite uncertainty over policies, the peso rose 0.7 percent against the dollar.

“There will be a honeymoon period moving forward as investors give Duterte the benefit of the doubt,” Smith Chua, chief investment officer for the asset management and trust arm of Bank of the Philippine Islands in Manila, said.

However, gains were tempered by losses in energy firms after a slump in crude prices as the wildfires sweeping Canada’s oil-sands region abated.

Japanese stocks advanced for a second day as the dollar made up more ground against the yen after Friday’s US jobs report provided hope for the economy but was weak enough to suggest any Federal Reserve interest rate hike would be gradual.

Japanese officials continued to try to talk down the currency, with finance minister Taro Aso repeating warnings about possible intervention.

The Nikkei index closed 2.2 percent higher while the dollar climbed to 108.93 yen, up from 108.34 yen in New York and sharply higher than the 105.50 yen troughs touched last Tuesday.

Toshihiko Matsuno, chief strategist at SMBC Friend Securities, told Bloomberg News: “We’re more likely to see a weakening yen this week. The Japanese currency has fallen to within the levels assumed for it by exporters, so investors will be able to buy the shares again.”

The figures provided some small hope for the world’s number two economy after weekend data showed another fall in exports and imports.

“We are witnessing a reversal of the deflation process,” Larry Hu, head of China economics at Macquarie Securities in Hong Kong, wrote in a recent note. “While deflation is very painful, the reversal of it could also lead to higher nominal growth and inventory restocking.”

Read Next
Diamante wins by 46 votes in Tuburan