Diamante wins by 46 votes in Tuburan 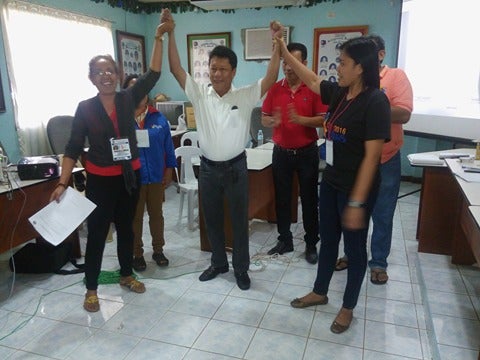 Democrito Diamante is still the Tuburan mayor, he was proclaimed yesterday by the Board of Canvassers. (CDN PHOTO/VICTOR ANTHONY V. SILVA)

Tuburan town Mayor Democrito Diamante won a third term by a mere 46 votes in one of the most hotly contested mayoral races in Cebu.

The municipal Board of Canvassers completed the canvass of votes on Tuesday morning and proclaimed Diamante of the Liberal Party as winner with 17,140 votes.

“You can see by the margin that it was very thrilling, although I did feel almost hopeless around 3 a.m. because I felt like I might really lose,”

Diamante told reporters shortly after his proclamation at the municipal canvassing area.

At past 1 a.m. on Tuesday, around 500 of Lagon’s supporters trooped to the covered court in this northwestern Cebu town. Believing that their candidate had won based on their own quick count, they were shouting, chanting, and dancing.

The mayor-elect vowed to implement more road projects and reduce criminality in the town during his last term. He said that when his term ends, he will retire from politics to take care of his family in Cagayan de Oro City.

The BOC completed its canvass of votes around 8 a.m., when poll results from Barangay Banquito, the boundary between Tuburan and Danao City, was finally uploaded manually.

The vice mayor-elect garnered 17,414 votes while his opponent Alex Montecillo of One Cebu received 15,164 votes.

The town was among the eight election hotspots in Cebu province identified by the Commission on Elections (Comelec) due to intense political rivalry and history of election-related violence.

One of Diamante’s supporters, Rene Cangmaong, was shot dead in an ambush last Wednesday allegedly by one of Lagon’s community leaders, Ludovico Roquero.