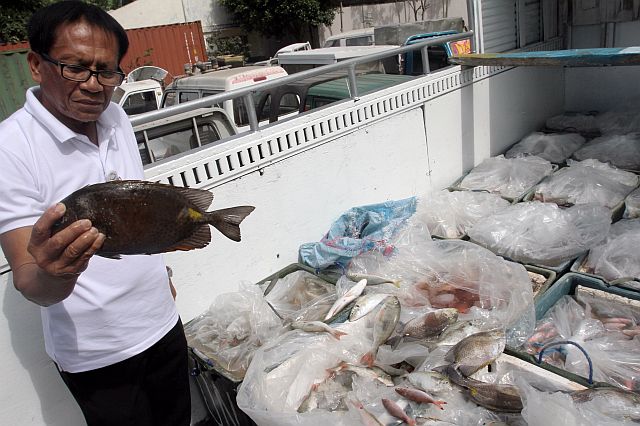 Ruiz said the blasted fish weighed a total of 1,620 kilos with an estimated market value of P243,000.

They also apprehended four people during the operation — the driver Gremer Muñez, helper Ricardo Alcontin, and passengers Peter Baro and Louie Perez, who are all from Mahawak in Medellin town in northern Cebu.

Ruiz said the suspects were later released but will be summoned once a complaint would be filed before the provincial government’s Fisheries and Aquatic Resources Adjudication Board (FARAB).

“As per our investigation, the vehicle was from Medellin en route to Pasil Market in Cebu City. They said they did not know the source nor the buyer.

The arrangement is they’ll be paid once they deliver the goods,” said Ruiz.

He added that Rodelio Codilla, a certified fish examiner from the provincial veterinary office, inspected the goods and found all the boxes contained blasted fish.

The vehicle used for transport, a white Isuzu truck with plate number GXG339, was impounded at the Capitol.

Dynamite fishing carries a penalty of six years imprisonment, according to Republic Act 10654, which amends the Fisheries Code, increasing penalties for violators.

But under Provincial Ordinance 2012-5, the fine for transporting blasted fish is P5,000 per kilo.

Ruiz said the confiscated fish will be turned over to the office of the vice governor for disposition.

“The examiner said the fish is still good for human consumption. It can be donated to charitable institutions just like what we have always done in the past,” he added.