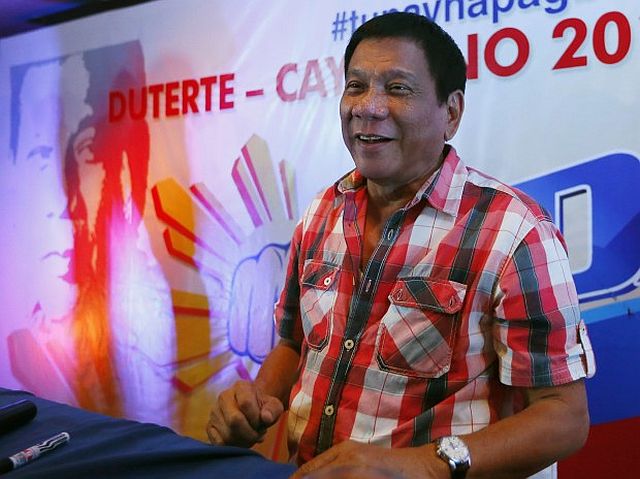 Presumptive president and Davao City Mayor Rodrigo Duterte in a news conference shortly after he voted at his polling precinct at the Daniel R. Aguinaldo National High School in Matina district, Davao City on Monday, May 9. Duterte was the last to vote among the five presidential hopefuls. (AP Photo)

Peter Laviña, spokesperson of the Duterte campaign team and a member of Duterte’s transition team, said it was Duterte’s executive assistant, Christopher Go, who received the President’s call on Thursday as Duterte was not around.

“Unfortunately, Bong (Go), who held the phone, received the call at the time when he and the mayor were not together. The mayor was resting while Go was in another meeting when he received (President Aquino’s) call,” Laviña said.

He said it was not certain when Duterte would show himself in public.

“The mayor is still taking a rest and we still don’t know the schedule of President (Aquino), but part of the transition activities will be a formal meeting between the outgoing and the incoming presidents, so there will be plenty of opportunity for both of them to meet before the assumption of office,” Laviña said.

“Some members of our team are in direct contact with members of (the) other party,” Laviña said, “but we have said earlier we will not move until the presumptive president is formally proclaimed.”

Meanwhile, the administration of Duterte will still pursue graft cases against erring public officials and even put them in jail amid calls for national unity to pave the way for a healing process after the polls.

“That will be a part (of what the new administration will do), depending on the evidence,” he said.

“We will go over these charges and complaints, go over the (pieces of) evidence,” he added.

He said they would rely on the Office of the Ombudsman, state prosecutors and even civil society groups in pursuing these cases.

Laviña said the prosecution of erring and corrupt public officials would not hinder the healing process, nor would it threaten national unity.

“In fact, this will fortify the healing process because this will show that those who err are made answerable for their acts but those who have not committed anything wrong will have nothing to fear in the new government,” Laviña added.

He also reiterated Duterte’s oft-repeated promise during the campaign to strengthen the prosecution arm of the Department of Justice that will handle cases involving corruption and heinous crimes.

Read Next
PNP, AFP on guard for special polls today