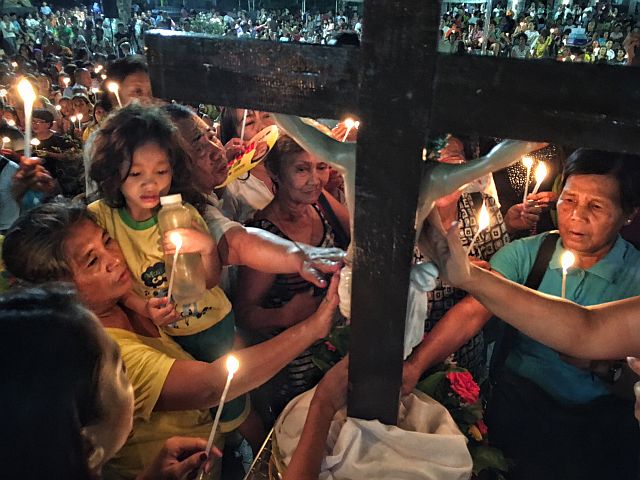 PRAYER RALLY: Supporters of Cebu City Mayor Michael Rama pray in front the crucifix mounted on stage for the rally held Monday night in front of City Hall. Rama encouraged his supporters to offer their “worries, hurts, and wounded feelings” at the foot of the crucifix . (CDN PHOTO/ TONEE DESPOJO)

Paintings that used to decorate the walls of the conference room of the mayor’s office at Cebu City Hall are now wrapped in newspapers and kept at a corner of the room. Plaques, trophies and other awards of Cebu City Mayor Michael Rama, which used to be displayed atop a cabinet in his office, were also taken out, leaving only a few pieces.

In yet another prayer-rally he called outside City Hall last night, Rama thanked all of his supporters for praying for him and other Team Rama members since before the May 9 elections.

It was time to move on, he said, saying he already conceded to the result of the elections where his rival Tomas Osmeña won by a margin of 34,000 votes. Come July 1, Rama said he hoped to go on a long overdue vacation after being a public servant for the last 24 years.

“It has been and continues to be an honor and privilege to serve the people of Cebu City. Akong isaad ninyo (I will promise you) that I will be with you and I wish you will be with me and the party,” Rama said in an emotional speech after yesterday’s Mass.

“I will always continue to serve sa atong Syudad sa Sugbo, might not be as an elected mayor,” he added.

But while he already conceded, the mayor said he would pursue an election protest against Osmeña, which would be handled by lawyers Ernesto

Rama and Joy Pesquera. Pesquera, who was elected city councilor under Team Rama, encouraged Rama’s supporters who have had firsthand accounts of alleged mismatch and cheating during the elections, to visit their law office and execute affidavits.

Speaking during the post-Mass gathering, Pesquera also asked the people to spread the word about it. Right now, she said, they were still gathering more affidavits and documenting cases of vote buying to be attached to their election protest, which will be filed before the Commission on Elections (Comelec) central office in Manila within the week.

Unlike in his previous prayer rallies last week where his supporters came out with signature campaigns to support Rama, and where Rama himself showed a PowerPoint presentation of the “statistical improbability” of the votes turnout in the elections, the atmosphere in yesterday’s rally was more of resignation.

Instead of resorting to violent means, Rama encouraged his supporters to offer their “worries, hurts, and wounded feelings” at the foot of a crucifix onstage which was blessed during the Mass.

After the speeches, Rama led all the supporters onstage, kneeling and praying before the crucifix while holding their lighted candles which they later on left standing at the foot of the stage.

He also announced that no more prayer rallies will be held until May 19, when a Mass will be offered at the Cebu Metropolitan Cathedral to mark the ninth day since the elections were held.

“We can’t put the city of Cebu in jeopardy. Governance has to proceed and Team Rama will continue to be around; way biyaay (we will not let go of each other). Having a prayer rally for days will not do (us) good. It will only create an impression that we are (not) levelheaded especially Team Rama.

We don’t want to be an obstructionist,” he told reporters in an interview after the program.

He also gave a message to incoming Mayor Osmeña that even if Team Rama already has the majority, they will not abuse their numbers and will support him as long as it is for the good of the city.

During the program, Rama also called on stage other Team Rama candidates who lost in the last elections — including Jaypee Labella, Ramil Ayuman, Gerardo Carillo, Ramil Ayuman, Edwin Jagmoc and Noel Wenceslao — and told them, “Welcome to the club. Life has to go on. We have to move on. Pray for us that we will continue to be motivated and trust again the system, that we won’t lose sight that it’s not winning that matters but how we fought,” he told the crowd, with his daughter Micheline watching on the sidelines.

Reelected Vice Mayor Edgardo Labella, in his speech, thanked Rama for helping him become the politician that he is now and assured that he and Team Rama members would continue to acknowledge him as their leader.

“Tonight, I said we are going back to God. We can’t take things within ourselves and we can’t afford to create trouble because we love Cebu City and I love my constituents and they love me too. I don’t wish to be remembered as a man, as a leader who promote violence. We’ve always been Rama-

Labella, we will always observe the rule of law. That we can guarantee,” Rama said in an interview.

After his terms ends on June 30, Rama said he would devote his time by being more active in the church and its activities. He said though that he will continue to be meeting with allies to discuss politics.

He said he would want to become active with the Knights of Columbus at the Cebu Metropolitan Cathedral or as a member of its lay group. He even offered himself to teach catechism to children.

Earlier yesterday, Rama already hinted on the possibility of conceding although he didn’t elaborate, as he meant to announce his decision later in the evening.

“I don’t (want to encourage) them (supporters) to be belligerent. But it cannot also be ignored that they are hurt. The most important thing is you have to look beyond . . . We cannot just be focusing on our misfortune . . . Life has to go on no matter what. We have to look beyond,” Rama said in a press conference earlier in the day. Rama made the statement after he denied encouraging supporters and senior citizens to sign a petition supporting him as the winner in the last elections.

“The most important thing is when you concede, you better be sure because when you concede, that means you’re submitting to this and that and you eventually said you have lost and it’s the people that will get mad at you,” said Rama, who brought reporters to his “payag” inside the Rama compound in Barangay Basak San Nicolas.

This was the reason, he said, why his lawyers would push through with the election protest case even if he knew his term would already end by June 30.

But Rama might not even be able to stay in office up to June 30, with a suspension order set to be implemented any time soon against him, Labella and 12 city councilors, over the grant of P20,000 calamity aid to city officials and employees in 2013.

Malacañang ordered the officials suspended as it upheld a Commission on Audit (COA) report that disallowed the cash aid since the city was not directly affected by the 7.2 earthquake and Supertyphoon Yolanda that hit the Visayas in October and November of that year.

But it was not known yet when the order would be implemented since the Department of Interior and Local Government in Central Visayas (DILG-7) was yet to receive the suspension order from its central office.

DILG-7 Regional Director Rene Bordeus said his office has not received the order by close of office hours yesterday. The moment he would receive the order, he said he would immediately direct his legal officer to serve it.

Rama, Labella and 12 city councilors were suspended for six months by the Office of the President last April 8, to be served for a period not exceeding their terms of office, or up to June 30, 2016. Since the order was issued within the election period, it could not be enforced without a clearance from the Commission on Elections (Comelec). Last Friday, the Comelec gave its nod for the DILG to implement the suspension order.