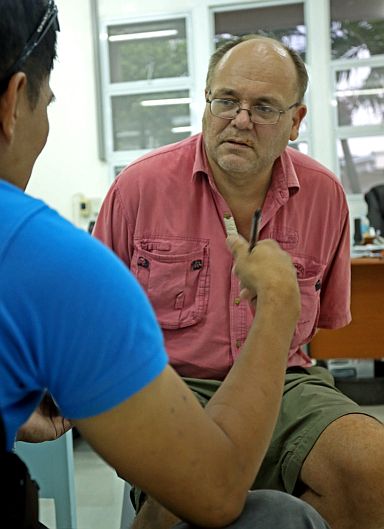 AGENTS of the National Bureau of Investigation in Central Visayas (NBI 7) yesterday arrested a British national for allegedly recruiting and exposing seven women to cyberpornography.

Wade Lloyd Allsopp, 52, was arrested inside one of the rooms of a hotel in Barangay Camputhaw, Cebu City past 4 p.m. in the company of seven women from the cities of Cebu, Bacolod, and Iloilo.

The NBI 7 recovered two laptops and two digital cameras that contained nude photos of the women.

The NBI, acting on an informant’s tip, placed the hotel under surveillance for two weeks before they raided Allsopp’s room. When they barged inside the room, Pura said one of the victims was half-naked.

Based on their investigation, Pura said Allsopp took nude photos of the women and would sell them abroad via the Internet. Allsopp also had sex with some of the victims, he added.

NBI 7 Assistant Director Ernesto Macabare said the women, whose ages were still being determined, were all treated as victims and would be interviewed to get more information about Allsopp’s operations in Cebu.

The victims, Macabare said, all claimed to be above 18 years old. They were nonetheless entrusted by the NBI to the Department of Social Welfare and Development.

Sought for comment, Allsopp said he came to Cebu a week ago for vacation.

“I came here to have a good time, not to exploit women. There are many bad guys out there, and I’m not one of them,” he claimed.

Allsopp claimed he was a retired finance officer from England and described the allegations against him as “unfounded.”

“I have no intention in getting money from the girls. Instead, I want to help them succeed in life and have a descent future,” he said.