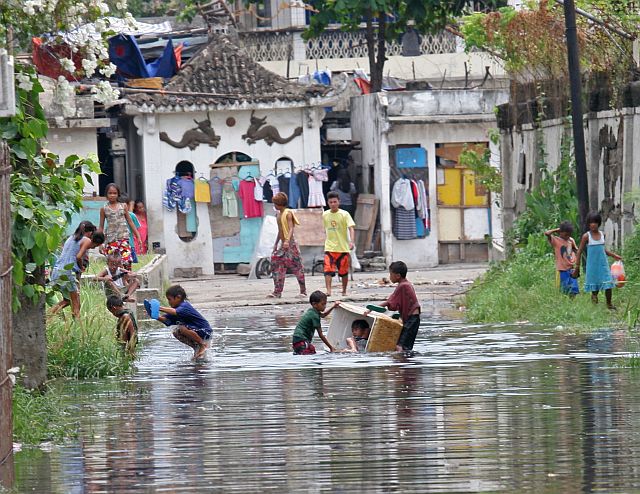 WATER PLAY. Children living inside the Ludo Cemetery in Barangay Carreta are only too happy it rained hard on Wednesday after months of enduring sweltering heat that they did not mind frolicking in dirty floodwater. (CDN PHOTO/JUNJIE MENDOZA)

The rainy season that has just began brought relief to the parched farms and aquifers of Cebu but it also carried a bane that a densely populated metropolis like Cebu has been experiencing: flash floods.

The heavy rain that began at past 3 a.m. yesterday immediately flooded for at least an hour the streets of the cities of Cebu and Mandaue, with the state weather bureau warning the public about the other risks that come with the onset of the rainy season: landslides, storm surges and lightning strikes.

Alfredo Quiblat, acting chief meteorologist of Philippine Atmospheric, Geophysical and Astronomical Services Administration (Pagasa) Mactan, said the onset of the rainy season came two weeks earlier than projected because the five consecutive days of rain at the western section of the country brought an accumulated 25 millimeters (mm) or more of rainfall due to the shift of the wind direction from easterlies to south westerlies, or the development of the southwest monsoon (Habagat).

In Cebu, Quiblat said the volume of rainfall measured for the month of May already exceeded its target of 100.6 mm as as a result of Wednesday’s heavy downpour that brought 40 mm of rain.

But, despite the rain experienced yesterday, the Metropolitan Cebu Water District (MCWD) public affairs head Charmaine Rodriguez-Kara said that it did not increase the volume of water in Jaclupan and Buhisan dams.

Kara said they hoped that more rains would come in the coming days to replenish both the ground sources and dams operated by MCWD if they are to meet the needs of its about 170,000 commercial and residential consumers, which average 0.8 cu.m. per day for a five-member household.

Quiblat said rain is already inevitable especially as the La Niña weather phenomenon is expected to dump heavy rains across the country starting sometime in July.

Because of this, he said the public and the local government units must prepare for floods, such as what happened in many streets in Cebu City yesterday; storm surges, which are common along the Talisay City coastal areas during the Habagat season; and lightning strikes, which could kill.

When lightning and thunder strikes, it is best to avoid anything pointed. Lightning also has a 9-kilometer vertical reach and it is not advisable to stay under the trees during a thunderstorm.

Yesterday’s downpour caused a branch of a Narra tree along S. Osmeña Street near Pier 4 to break and fall on the road. This disrupted the flow of traffic in the area at 5 a.m., said Mark Gabuya of the Cebu City Disaster Risk Reduction and Management Council. Quick Response Team (QRT) personnel cleared the road after 30 minutes.

The QRT personnel who responded to the alarm were fetched by a patrol car of the Cebu City Transportation Office (CCTO), said Harold Alcontin of QRT, since their office no longer has a vehicle after their pickup service was recalled by Acting Mayor Margarita “Margot” Osmeña.

For now, Alcontin said they were coordinating with barangays that have their own patrol cars to pick up their personnel if they needed to respond to any emergency.

Minor flooding was reported in Colon and other downtown Cebu streets but did not cause any serious traffic problem as the rain subsided before office hours started, said Joy Tumulak, operations officer of the Cebu City Transportation Office.

About 340 persons from 60 families also had to be evacuated from flooded low-lying areas in Puroks (sub villages) 2 and 6. The evacuated residents returned to their homes after the knee-high flood subsided by noon, he said.

Mandaue City Disaster Risk Reduction Management Office (MCDRRMO) head Felix Suico said the affected residents were provided with rice and canned goods as many of the food items they left behind were damaged by floodwater.

With the rainy season coming in, Suico said they have also started a massive cleanup of the city’s waterways and rivers and have activated their barangay disaster brigades to attend to emergencies

“I also urge the public and residents to always clean their surroundings. They should be responsible and not throw their trash anywhere specially near our drainage and waterways,” he said.

Meanwhile, Cebu Provincial Disaster Risk Reduction and Management Office (PDRRMO) spokesman Julius Regner said there were no reports of any untoward incident in the province due to yesterday’s downpour. But, he said they should not be complacent, as heavier and longer rains in the coming days could spell disaster.

“We are now looking at heavy flooding and landslides. Cracked soil due to the drought becomes more prone to landslides so we must be cautious,” said Regner.

Regner added that El Niño response materials such as plastic drums can also be used to store rainwater during La Niña.

He said they have already instructed LGUs to strengthen their respective barangay DRRM committees, which are tasked to facilitate disaster response at the grassroots level.

The PDRRMO earlier required Capitol department heads to submit their La Niña action plans that would be presented to Gov. Hilario Davide III within the week, Regner said.

Read Next
No session, no bonus