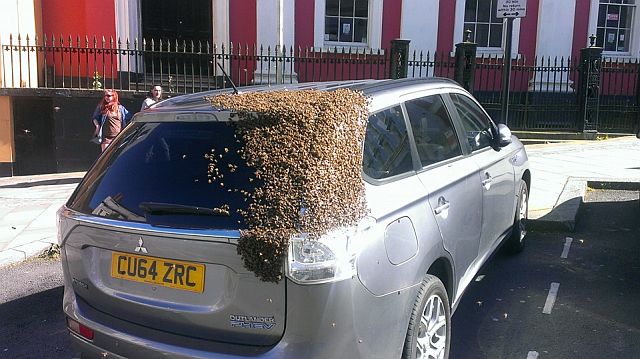 A swarm of bees chase a Welsh after their queen gets stuck in the boot of her car. (Inquirer.net)

A Welsh woman failed to use her Mitsubishi Outlander for two straight days after a battalion of bees swarmed the vehicle on Sunday.

Carol Howarth, 68, had parked her car in Pembrokeshire, West Wales, United Kingdom. While she was away, Tom Moses, 41, a park ranger, saw bees swarming the car’s back window. The ranger then decided to phone the Pembrokeshire Beekeepers’ Association.

“Driving through town noticed this going on outside the Lower Three Crowns and couldn’t resist getting involved,” Moses wrote in his ‘bee-rilliant’ post on his Facebook account.

According to reports from Huffington Post and CNN, although the beekeepers were able to collect a massive number of bees during that day, hundreds of them stalked and continued to swarm Howarth’s car on Monday morning.

It is believed that a ‘queen bee’ unintentionally buzzed inside Howarth’s car, thinking that the car’s warm temperature was a suitable home for her and her colony. Finding out that the winged passenger is stuck, her colony “ambushed” the car in pursuit of saving the queen.