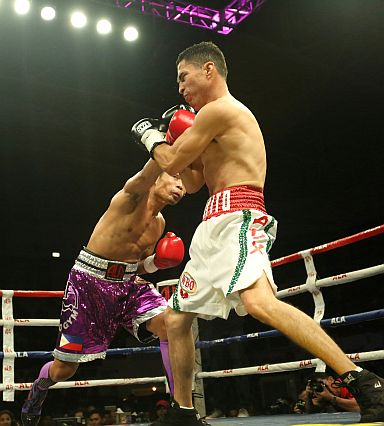 The 34-year-old Nietes retained his World Boxing Organization Light-flyweight crown as he demolished Raul “Rayito” Garcia via fifth-round technical knockout in the main event of the Pinoy Pride 36: A Legend In the Making fight card held at the Saint La Salle University Stadium.

With this convincing victory, Nietes’ promoter Michael Aldeguer, chief of ALA Promotions International, feels it is the perfect time to test his boxer in the more competitive 112-pound division.

“I think it’s about time to give Donnie the bigger names,” Aldeguer said of his fighter who has dominated the 108-pound division by defending the title for the ninth time. “Nietes is like wine. He gets better as he ages.”

Nietes showed this in his recent fight, knocking down his opponent twice in the third round and keeping the pressure on Garcia in the following rounds. Garcia, after receiving a beating, didn’t get up from his stool after the fifth round.

“I knew I had him from the first round,” Nietes told the Inquirer in Filipino. “I found no need to hurry up as his body was already hurting.”

Garcia became the Nietes’ 15th Mexican victim, with the list including his twin brother Ramon Garcia Hirales, whom the Filipino champ defeated at the same venue in 2011.

Nietes, who started as a janitor in the ALA Boxing Gym, improved his record to 38 wins with 22 knockouts, one single loss and four draws.
Garcia suffered his fourth loss to go with 38 wins (23 knockouts) and a draw.

Aldeguer revealed that he is in constant communication with WBO, Zanfer Promotions and HBO to promote a superfight between Nietes and the reigning WBO and WBA flyweight champion Mexican Juan Francisco Estrada this year.

This, even as Nietes is scheduled to have a mandatory defense against archrival Moises Fuentes of Mexico, the number one challenger for the light-flyweight title.

According to Aldeguer, Zanfer and Fuentes already signed the contract for the mandatory world title showdown scheduled on Sept. 24 at the StubHub Center in Carson, California. But Nietes, one of the few WBO world super champions, has an option of calling off this scheduled bout to push for the Estrada superfight.

Read Next
Cuizon on a roll in PPS-PEPP tilt