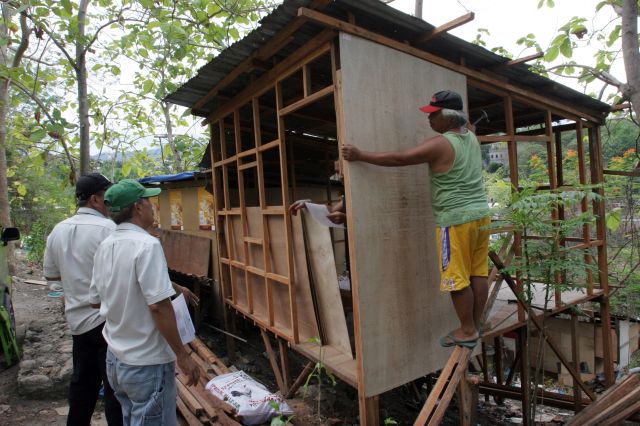 Members of Prevention, Restoration, Order. Beautification and Enhancement (Probe) ask carpenters to stop the construction of houses as they serve notices of demolition to the informal settlers inside the 4.3-hectare Osmeña Shrine in Barangay Kalunasan. (CDN PHOTO/JUNJIE MENDOZA)

AT first it was just plastic straw tied to the trees to delineate the areas they claimed for themselves. Now illegal structures have sprouted on the 4.2-hectare Osmeña Shrine in Barangay Kalunasan, Cebu City.

But the clincher was the burning and cutting of the trees inside the forested area by the informal settlers so they could use the logs to build their houses.

“I have already issued the order after going through the city legal office that we can demolish them. Grabe na, they cut down trees just to build houses,” she said.

She gave the Prevention, Restoration, Order, Beautification and Enhancement (PROBE) team 10 days from last Friday to clear the area.

According to Osmeña, the construction of the structures had no permission from the city government.

Yesterday four personnel from PROBE went to Osmeña Shrine and served a notice of demolition to the residents.

PROBE team head Raquel Arce said that initially they had 15 names in their list of persons who built illegal structures on the lot, but they were surprised to learn that the number has more than tripled.

(There are already more than 50 structures. There are also demarcation lines to divide the land so most probably, there will be others who would build more structures. Most of them use light materials so that it is easy to construct.)

But whether or not they are in the list, Arce said the structures will still be demolished because the order stated that it would “include similar structures.”

“Naay nahuman gyud nga three structures nga gipuy-an na gyud. Naay usa nga gihimong tindahan. Kani ipa-clear na gyud to,” she said. (There are three structures that have been completed and occupied already. There is one that is used as a store. This should be cleared.)

Osmeña said that it seemed that every single day, new illegal structures are being built. She said she had received complains from various people including the home-owners associations.

Osmeña said there will be no relocation site nor financial assistance for the owners of those illegal structures.

“There is no obligation for the city to relocate (them) as far as I know. And I don’t think so (the city can give financial assistance). You go in there (illegally) and after that the city owes you na? Diba?” she said.

She also denied that her husband, Cebu City Mayor-elect Tomas Osmeña gave the go-signal to the families to construct houses there.

In fact, she said, it was Tomas who kept on reminding her about the illegal structures at the Osmeña Shrine property.

“Even before elections, they were saying that Tommy was the one telling them to move in, obviously not. How could Tommy, just because it is called Osmena Shrine? It is owned by the city,” she said.

The notice of demolition will lapse on June 10, said Arce.

“Akong hangyo nila voluntary nalang pag-vacate and guba sa ilang structure. If ever PROBE will clear it, ma-confiscate ilang gamit gikan sa kinagamyang lansang in favor of city government,” Arce said. (I would like to request them to voluntarily vacate and dismantle their structures because if PROBE will be the one to clear the area, everything will be confiscated in favor of the city government.)

Meanwhile, Osmeña said that while the city has no plans yet for the property, it will be fenced for security purposes.